Heritage Ushers in Something New for CBSE

The Dubailand based CBSE curriculum school opened its doors in April 2018. The school in its phase one has more than 1000 students and a number of add-ons integrated into the curriculum.
Heritage Ushers in Something New for CBSE
By Veathika 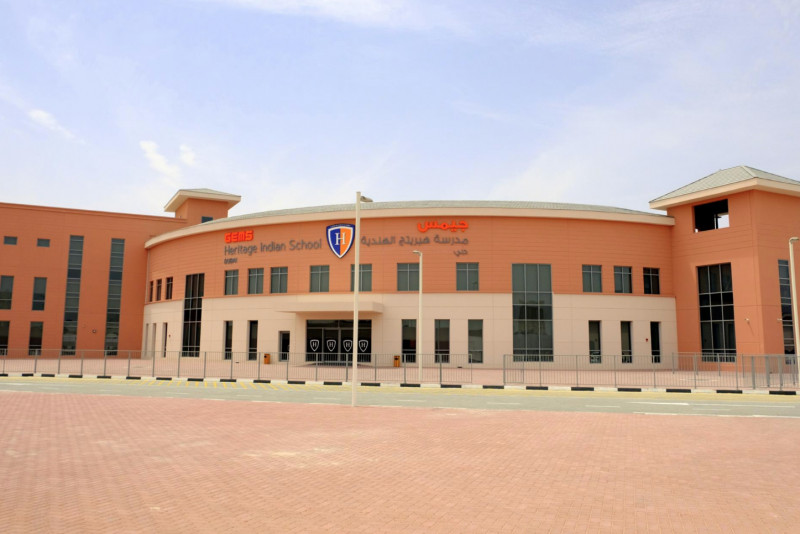 GEMS Heritage Indian School in Dubai is based in Dubailand, adjacent to IMG World of Adventures and opened its doors at the start of the Indian academic year in April 2018.

The school currently has 1067 students in 128 classrooms, supervised by 75 teachers. GEMS Heritage is currently operational from KG to Grade 9. It will eventually offer an all through education.

Leadership comes in the form of Executive Principal Darryl Bloud, Principal Anjuli Murthy and Vice Principal Kapil Chaudhary. All three have been in the UAE for more than 20 years and have come from GEMS Modern Academy.

We met the trio looking somewhat bowled over by the successful launch of a cricket academy. Legend Brian Lara had just finished playing cricket with the boys and girls at the school.

Mr. Bloud explained how this is very much part of what makes the school unique when compared to other CBSE schools in the UAE.

“You will not find another school with such an integrated approach to performing arts and sports. Both are integrated into the curriculum in the students’ timetable in the mornings. We play on the strengths and the interest of each child to choose what they want to be professionally trained in – say cricket or Kathak, the Indian classical dance. They then get specific training in that during their PE or drama lesson.”

The school’s focus is to get a balanced approach from early years onwards, and to emphasise that sports and the arts is an integral part of the curriculum - not a hobby.

The school is also not afraid to let parent knows it uses external suppliers for this.

“More than 300 of our students have signed up to the after school programme which offers not just Performing Arts (an extension of the integrated programme with Malhaar) but also Sports (in partnership with ESM, Cricket, Football, Badminton, Tennis, TableTennis), Theatre, HipHop, Self Defence and STEM activities."

Because an external supplier is used, classes are an additional cost to parents, but these are said to be very affordable.

"The fee is a very affordable 35 AED an hour, and classes are taught immediately after school. This helps parents as they don’t have to go outside of the school to enroll their children for such extra curricular activities."

School fees at Heritage ranging from 14,000 AED to 24,000 AED. This is mid-priced for an Indian, CBSE curriculum school in Dubai.

We started the GEMS Heritage Indian school tour with a history lesson, courtesy of the corridor we were walking through, which shows the evolution of Dubai, starting from 1833. Key events are displayed on the massive wall.

Our first stop was early years, which is centered around hands on learning with a number of outdoor learning courtyards, and a sensory garden.

Teachers are actively encouraged to take the students outside of the classrooms.

There are four outdoor courtyards with different themes, an indoor gym, an outdoor sensory garden and a massive play area.

We were very impressed with the music instruments in the play area, which could potentially form a ‘playground band’.

The classes are spacious with abundant natural light and access to outdoor areas with corridors full of colourful school and art work.

Mr. Chaudhary said: “The teachers have designed the entire early years part of the school, from the flooring of the playground to the equipment in the classes. They have been involved from the very beginning - to such an extent we did not need an interior designer for this entire section of the school.”

After the colourful KG section of the school, we moved on to a more studious first floor, which has three science labs, three ICT labs, two music rooms and a Science, Technology, Engineering, Arts and Maths (STEAM) lab.

The school has a Renaissance Centre which is a room and a huge curving corridor with outside seating for small groups of students to work on robotics, nanotechnology and coding.

According to Mr. Chaudhary:

“We have identified 12 main technologies that will be needed in the 22nd century and the Renaissance Centre is catering to develop those skills. Here students can work on their projects, even in teams of two or four and can engage in developing, testing and implementing their ideas and use their time to hone these skills.”

We were again impressed by the cricket facilities, which feature a commentator’s box/room and three viewing rooms that can accommodate about 100 people.

“The academy has been launched with the aim of developing professionals by the time they are 17. Indian parents are willing to let their kids pick up a game, but schools will not have the specialisms to be able to provide professional training within the curriculum. That’s what we are trying to offer.”

The school is being opened in three phases, with the first phase having a capacity of 3600 students. The capacity will hit 10,000 once all three phases of the school are finished.

The second phase will see the main reception and construction of some classes and more labs. Phase three will expand the number of classes as the school goes up to Grade 12.

While Heritage is not unique in incorporating Art and Sport into its curriculum, it is in the level of integration into the school timetable, and in the emphasis being given to a broader, more balanced CBSE framework. We genuinely like its approach. We also appreciate the possibility of specialisation being offered, and the quite radical idea of bringing in East Costs Sport and Malhaar to deliver certain programmes, although we would want to make sure that there is not a creep of external supplier cost creeping into what some would say should be a core school offering.

Overall this is a well designed, well thought through school, and we left Heritage thinking this is a real addition to the education landscape, that does offer its parents something new. If it continues to deliver on its promise, it could prove to be a school and a school model that is truly valuable.

If you are a parent with a child at Heritage Indian School in Dubai, please let us know what you think. Complete the Survey here! You can also leave a comment on our Web or FB page...