WhichSchoolAdvisor.com talks to Sanjay Mankani, the head of Fortes Holdings, about what motivates him, and the school group, to keep pushing the boundaries of education within the UAE.
Sanjay Mankani Interview: Reaching for the Sun
By C Hoppe 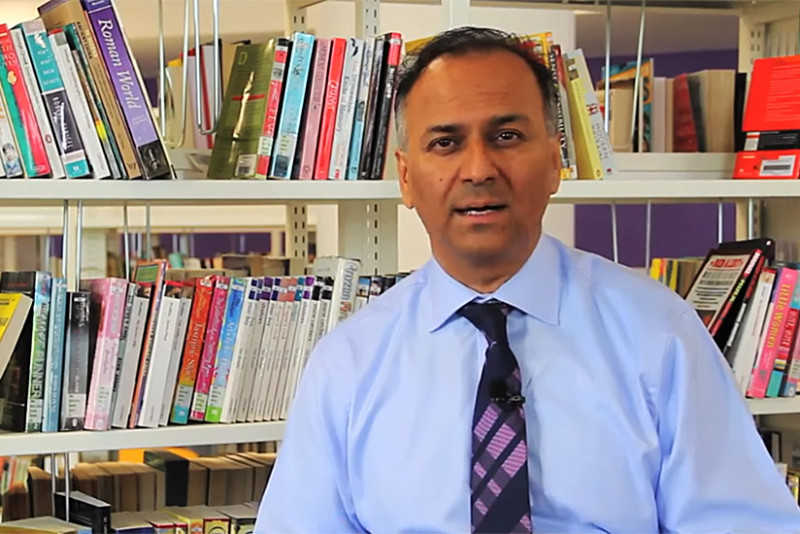 Sanjay Mankani doesn’t usually do interviews. But then again, it’s not every day that his company, Fortes, launches a premium British curriculum school at exceedingly affordable prices.

Not only is he keen to talk, whichschooladvisor.com is interested to learn more...

Yet, back in 1975, when it all began, Fortes focused solely on construction and was owned and managed by Sanjay’s father Mr. Shyam Mankani.

Even in those early days the group ‘dabbled’ in education, but the single ‘Fortes’ school was a collection of Jumeirah villas, established and managed by Sanjay's mother, Mrs. Shakuntala Mankani.

“Coming to Dubai with an education background, my mother had a very strong vision as to what education should be – inspiring, empowering, rigorous, and inclusive but also at an accessible price.”

“It started out small, but then she had a lot of the expatriate community members put their kids in…. She ended up with a small set of villas which eventually had 250 kids; it was literally bursting at the seams,” he says.

"Education" Sanjay says, “has always been in our family DNA, it just resurfaced once they [his parents] got here.”

The Mankani's background in schooling is both lengthy and prominent. Many years before the partition of India, the family, originally from Sindh, an enclave in the territory later earmarked for Pakistan, had established and managed amongst other ventures, a charitable school.

“Our family’s pride was the all-girls school,” Sanjay says. “It was a fully charitable institution, educating and empowering women, which was something of a rarity in those days.  So in many ways, our schools [in Dubai] are about going back to our roots and giving back to the communities which we are a part of,” he says.

After the partition of India, like most Sindhi families, my parents fled almost overnight to India, finally settling in Bombay.  Everything was left behind; the family businesses, the schools, farm-lands and our ancestral homes.”

He says, “I was born in Bombay, and almost immediately moved with my parents to Dubai. It’s now our home, where we have established deep roots and have a strong sense of belonging here.”

Sanjay completed his education in the US with a double degree in Finance and Electrical Engineering from the University of Pennsylvania.  He then remained in the US for a number of years working as an investment banker for a well known Wall Street firm.

Sanjay says, “I was an investment banker, yet I felt like I was trapped in an entrepreneur’s body.”

So, when the UAE's entrepreneurial opportunities called in the mid-90s, Sanjay answered by leaving the US for good. Once back ‘home’ he wasted little time in joining and expanding the Fortes family business.

By 2000/2001 the Mankani business was thriving, yet their mother’s small villa school still remained very much at the heart of family life. Expanded now to include several villas, the school was full and it was becoming urgent that a solution be found to ensure its future.

Sanjay says he told her, “this is a beautiful thing you have, but it’s going to die, because you’re in a villa and the regulations are going to change. She asked me what we should do, and I said, let me borrow some money, from you and the bank and we’ll find an opportunity.”

The opportunity came in the form of Emaar and a plot in a newly developed community, The Greens.

Regent International School moved out of the Jumeirah villas and into The Greens in 2005, expanding to offer Foundation to Year 10.

Rated ‘Acceptable’ by the KHDA in its first inspection in 2010, the school has since been rated consistently ‘Good’ from 2011 onwards, with the KHDA highlighting its ‘rapid improvements’.

Expansion and development at Regent didn’t stop there. By 2013 the school had added Year 12 and grown from 956 to 1,143 students. The following year it added a further 200 students and introduced Year 13.

In 2015, the school received another ‘Good’ rating. However, many aspects of progress and attainment in the core subjects (English, maths and science) were recognied as being ‘Outstanding’ as was the majority of the Foundation indicators. Interestingly, the school has consistently received ‘Outstanding’ for its students’ personal and social development.

Sanjay puts the success in this area down to the school’s USP, two unique educational systems pioneered by staff at Regent: the Education in Human ValuesTM (EHV) and the MultiSmart LearningTM programme.

“We have consistently been awarded ‘Outstanding [by the KHDA] for our attitudes and behaviour, as with the recent BSO inspection,” he says.

The two systems not only give the Regent curriculum more of an IB ‘feel,’ they also address and develop a student’s positive character traits, include diverse teaching methodology and thorough assessment.

The EHVTM programme aims to develop the child’s strength of character and the associated attributes such as: courage, honesty, compassion and humanity; via songs, readings, value-based activities and teacher-led lessons.

The MultiSmart LearningTM system is different. Focusing on the concept of multiple intelligences, teachers at Regent (and soon Sunmarke) present information in a way it can reach every child. Based on the concept that we all have key ‘intelligences’ in various degrees of aptitude, the Multismart LearningTM programme  aims to help children apply knowledge, think creatively, work with others, persevere, build character and develop their leadership qualities.

“We have a robust curriculum and we have enriched it with our own flavouring, our own provision and our own ethos,” Sanjay says.

But what of Sunmarke School, the Fortes’ company’s newest education venture?

The 3000 capacity purpose built facility being built in JVT and set to open in September 2016, with 21st century facilities, experienced secondary staff from Regent and classes right up to Year 13 from the get go, is certainly not the ‘average’ new school offering.

The plan is that Regent’s secondary pupils will move over to Sunmarke (7 minutes away), allowing Regent itself to focus entirely on EYFS and Primary education.

This secondary enrolment from Regent will put Sunmarke in the most unusual position for a new school, that of launching with significantly more secondary students, than those in Primary.

As discussions move to the Regent students relocating to Sunmarke, Allen Bird, Fortes Director of Education notes, “you can’t make a universal statement about it, because rightly so, we have a very diverse community of parents with different priorities. The vast majority of parents recognise the need and the opportunity on offer at Sunmarke. And we’re getting very good feedback about it.”

“It’s interesting,” says Sanjay, “to see at Regent, how many people deliberately moved into the area so they could walk to school, and that’s been a lovely thing to hear, but then if you’re a parent who has children going towards that Secondary, there’s a lot to think about, but again it’s a portion.”

“There’s another set of parents who want to know more, and right now we’re in the process of trying to make sure that we’re answering all their questions,” says Bird. “We’ve been working very closely with parents, to make sure we can reassure and help and give advice.”

"Right now, we have the majority signed up as it stands, and it’s now just about following up the outlying ones and seeing how we can accommodate them.”

“Overall though” he says of Regent's parents and students, “they’re excited.”

Anyone who has looked through the website or browsed the Sunmarke prospectus can’t fail to notice just how ‘affordable’ the new school will initially be - for a premium tier 1 school.

Parents can expect to pay between 44,900 AED and 55,900 AED for Foundation through Primary during the first three years, while the Secondary’s most expensive Year is 13 and even by 2019 will cost only 72,900 AED. All the fees quoted are significantly below the KHDA’s approved tuition fees, some as much as 22,000 AED per year.

Founders (those who join Sunmarke this academic year and the existing Regent students who make the move across to Sunmarke), will effectively be receiving an exceedingly good value, proven, premium education in a brand new 21st century facility, at exceedingly competitive prices.

It would seem the discounts are not simply empty promises either, as Sanjay recounts the school’s previous move to the Greens. “When we moved from the school in Jumeirah, to Regent, parents who moved with us during the first years of operation kept asking why we were charging so much less than many of the other schools.”

"Expat schools are not government funded, and therefore have to be sustainable," he says.

"We, at Fortes Education, have made a conscious decision to seek only fair returns by structuring our fees competitively for our parent community.  And I think our parents appreciate this."

Back to Sunmarke, and Sanjay says, “even after the three year moratorium we have to be sensible with our parents. The worst thing for parents is not being able to have clarity and plan, it’s a nightmare for parents.  Salaries don’t go up proportionately either, so we have been planning to have various financial packages available to our parents.”

“We have different discount and financial plans depending on how parents pay and when they pay.”

“The founding parents to us - are the founders,” he says.

The Mankanis’ aren't stopping with Sunmarke.

During our interview, Sanjay notes at numerous points in the discussion that the plan is to build more schools in the future. However, he does note, “we won’t simply be ‘pepper-spraying’ them around. Instead, Fortes Education intends to focus on the quality and getting it right.”

This year, as the economy cools and a staggering 19 new schools announce their plans to launch in the 2016/17 academic year, there’s considerable speculation as to who will be the city’s winners and losers come August.

And, while there are many new schools in the premium sector who might be wondering just how to fill their brand new seats, Sunmarke with its ready-made student body, clear USPs and discounted fees, must surely be more confident than most.