The Truth About Online Schooling

When most children returned to in-person schooling once pandemic restrictions had eased, some families said no to the regular school environment. WhichSchoolAdvisor.com spoke to three families in the UAE to find out why they choose online schooling for their children and what that experience is really like long term.
The Truth About Online Schooling
By Susan Roberts 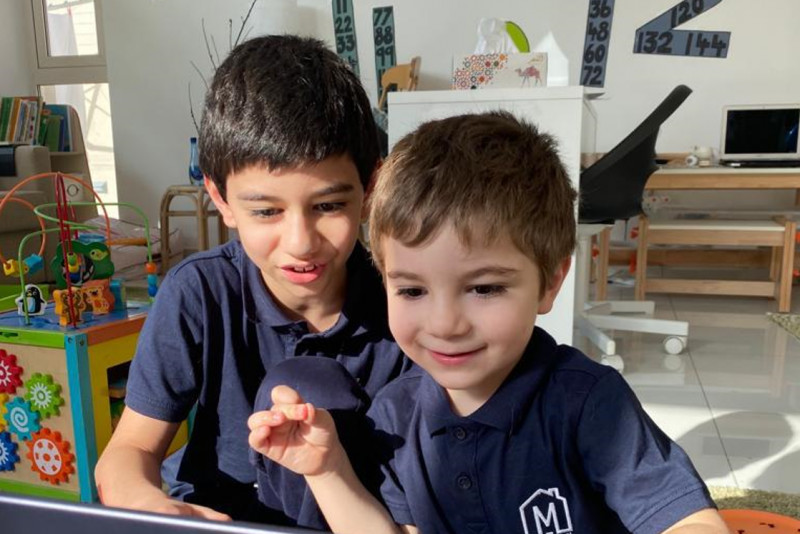 When most children returned to in-person schooling once pandemic restrictions had eased, some families said no to a regular school environment. WhichSchoolAdvisor.com spoke to three families in the UAE to find out why they opted for online over traditional schooling for their children, and what that experience is really like longer term.

“When I told them my school is online, they just looked at me like I must be some kind of feral kid. They even asked me a couple of mathematics questions, you know, to see if I knew how to work out the answers” laughed Alexander, a Year 8 student in Kings InterHigh, describing an interaction with a group of boys he met at a summer camp.

Alexander has been educated online for the past three years. As he eloquently shared this story, with an air of confidence not usual for his age, it was notably apparent that he may be better prepared to handle social situations like this than most.

Alexander’s Mum, Theresa, has experienced similar perceptions from other parents:
“They seem to assume that if you’ve chosen online schooling, you must have been forced into the situation, that there must be a reason the child can’t attend a mainstream school.”

Is there any truth in this perception? Or have these ideas become outdated and inaccurate? As we delved into the world of online schooling, we found that for the three UAE-based families who shared their stories with us, this common view could not be further from the truth. Rather than a last resort option, they explained that online schooling has been a conscious choice and a largely beneficial experience.

Your child does online schooling? But why?

Theresa explained that the circumstance that led to Alexander enrolling in an online school, the family's relocation to a remote UAE community for work, was really just a final push. The family had long since taken an alternative approach to Alexander’s schooling.

“I had always been a big advocate of the principles of the Finnish education system; Alexander didn’t attend a formal school setting until he was seven years old as I knew he didn’t need it. His first school was really accommodating, I told them in Year 2 that I didn’t want him sitting at a desk for seven hours a day. Academically he was doing fine, and I didn't want the pressures of standard schooling for him. I was always taking him out of school to go and do fun things that we wanted to do, like trips with other home-schooling families.”

This was equally the case for Mum of three and trained teacher, Lucy Al-Madani. The Emirati-British family had lived in multiple countries and had chosen for nine-year-old twin boys, Noel and Shafei, to be educated in local schools. Lucy had always partially homeschooled her children to provide a balance and support their English language development. When their school in Dubai announced it would not reopen immediately after the pandemic, taking a few years to refurbish, Lucy and her husband decided to keep homeschooling until the school would reopen.

Enrolling in an online school allowed Lucy to provide a solid curriculum with all the resources they needed. Using the KHDA approved Icademy, they would also receive the required transfer certificate upon a return to in-person learning. For Lucy's family, online schooling was an enhancement to her homeschooling practice, and she relished the opportunity to spend more time with her children, expressing the joy she feels seeing those ‘A-ha moments' of learning firsthand.

For our third family, their move to online school, Kings InterHigh, was more directly pandemic related. Vience, Mum of 13-year-old Surya, told us it was the uncertainty they experienced as pandemic restrictions eased, with schools switching between online and in-person learning at a moment’s notice, that gave them the push to commit to an online school long term. Surya’s developing independence and self-motivation made this the right fit for the family, who have found that online schooling allowed for his individuality and afforded much greater flexibility for family life.

But aren’t your kids deprived of social development?

The three families cited this as one of the most common questions they are asked by other parents. Each responded with a resounding NO, but also spoke of the need to proactively create and find social opportunities for their children outside of school.

Vience explained that this hasn't been a major concern for her due to her son's very social nature, explaining that he takes part in a variety of sports activities, including surfing and horse riding. She added that online schooling has made Surya's social experiences much more consciously selected:

Theresa highlighted her view that while the absence of in-person social interaction may appear a limitation, there are positives to keeping social engagements outside of school:

"Being thrust into that social environment in a regular school can be a good or a bad thing. There's all the bickering that goes on, and not always an awful lot of parental control or supervision."

Isn't it a lot of work for parents?

Our families differed in their responses on this point, largely due to then differing ages of their children but also their contrasting approaches and perhaps outlook. It is clear that online schooling is a major parental commitment when children are younger, with less parent involvement required as they get older. As a minimum, however, the availability and presence of a key adult is crucial. Of the three families who shared their stories with us, two have a parent not working, while one has a parent working from home.

Mum of three, Lucy, explained that she views this commitment in a very positive light. She shared her perspective:

"It is literally a lifestyle change that you, as a family, take on. If you don't have enough time or the inclination, then I don't believe that you would get anything out of it.

When you send your child off to a regular school, and they come back, and you say, how was your day, a lot of kids will just shrug or say “yeah it was OK”.  But when you're actually there and you’re involved in teaching them, you get to see that light go on, you actually see the moment that they learned a new skill. That, to me, is one of the biggest reasons for doing this, I get to be part of that."

Lucy went on to explain the wider impact she believes her involvement in her children's education has:

"One of the things that we were concerned about, as parents, when it came to the boys’ schooling, is that you never quite know emotionally, what the kids are going through. Whereas now, it's very much how we want our kids to grow up, we get to form the kind of men that they're going to be in society. That is one thing that is a really big deal for me and my husband."

Vience explained that she views homeschooling and online schooling as being entirely different. While she recognises that her presence at home has been key for Surya, she also added that she is very able to work while he studies:

But do they really learn as much as they would in a regular school?

While this would perhaps not be the case for all children, there was a resounding message from these families of the benefits of online schooling in terms of academic development and success.

Theresa shared her theory on why this may be the case:

"The learning seems to be really accelerated, and it’s because there isn’t a need for the teacher to management behaviour. In a bricks and mortar classroom, the teachers are forever firefighting, facing interruptions. Academically speaking, I've seen Alexander go from strength to strength."

She added that feels the pedagogical approach at Kings InterHigh offers more than just academic learning:

"One of the things I noticed early on (and loved) was that Alexander was being praised for doing things differently, for having his own approach, rather than being told ‘that's not what I asked you to do’. He was encouraged to be creative in his own way, even though it didn't quite fit the rubric. Their approach really does encourage  creativity, their own style of learning, and their own cognitive processes."

Lucy was eager to highlight the quality of teaching she had observed at Icademy:

"These teachers are the kind of teachers that you think 'I wish I had them'. Or that I wish that when the kids were going to regular school, they'd been able to have you as their teacher, because you make it so much fun. That teacher is forming relationships with the kids. And that teacher is making sure that they're learning that they're on track, there's no peer pressure, no anxiety or stress."