Often excited by the prospect of their child gaining an additional language while living in the UAE, many expat parents report feeling disappointed when their children appear to show little interest in learning Arabic. With the help of some of the UAE’s leading Arabic teachers and department heads, as well as parents themselves, we have sought to better understand the challenges, and to explore the approaches of the most innovative UAE schools that are making real gains.
Why Aren't Expat Children Mastering Arabic?
By Susan Roberts 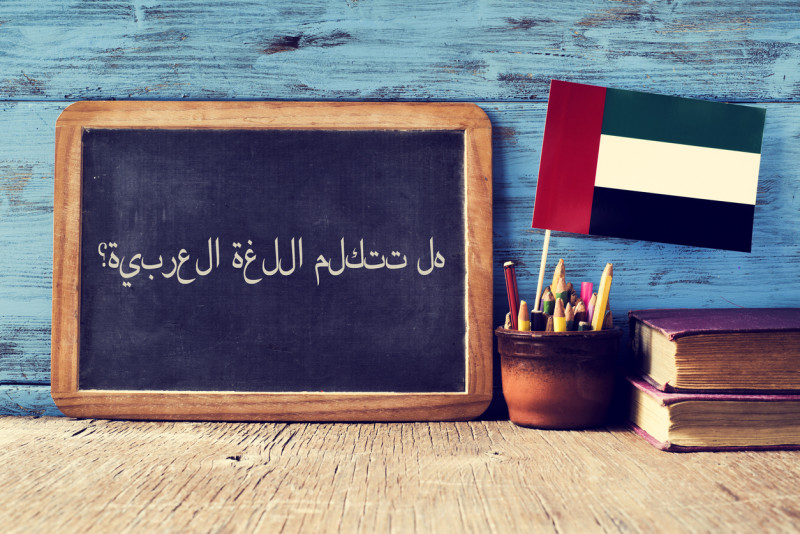 Often excited by the prospect of their child gaining an additional language while living in the UAE, many expat parents report feeling disappointed when their children appear to show little interest in learning Arabic, and appear to make minimal progress.

Shalini Prasad, a Dubai-based Mum of 2 teenaged children from India, told us:

"My kids are counting the days until they can be done with learning Arabic. As a parent, it is frustrating to watch the lack of interest in Arabic especially considering that a large chunk of the weekly timetable is devoted to it. I would love for my children to have a basic mastery of the language."

Unfortunately, Ms Prasad is not alone in this frustration. With non-Arab expat school children in the UAE attending compulsory Arabic classes from Year 1 to Year 10, we ask the question: why aren't expat children picking up the UAE's official language?

With the help of some of the UAE’s leading Arabic teachers and department heads, as well as parents, we have sought to better understand the challenges, and to explore the approaches of the most successful Arabic teaching UAE schools whose innovations and methodologies are delivering real returns.

Julia Benaich, a Dubai-based Mum from Ukraine, tells us:

"My son is not fond of learning Arabic. I think it’s because kids hardly use it outside the class, so whatever has been learned in class is quickly forgotten.”

"We are in the UAE, where the official language is Arabic, however, we have English everywhere. I know a lot of people who have lived here for 20+ years but they’ve never used Arabic in their daily life. They didn’t need to use it, because everything is translated, everyone is speaking English."

A factor highlighted by many parents and educators alike is that while Arabic is the official language of the UAE, English is the more commonly used language. While Arabic speakers make up a significant group in the country, there is a tendency for even these Arab nationals to speak English, particularly outside of the home. This lack of opportunities outside of the classroom to practice using the language undoubtedly creates limitations for learners of Arabic.

This is not the whole picture, of course, as the same could be argued of any foreign languages taught in UAE schools, where the same reluctance from students is not present, at least to the same level...

Arabic as a Compulsory Subject

Undeniably, most children, young people and adults alike, do not like to be forced into something without their consultation, and in this case, particularly when this would not be the case in their home countries. While many agree that learning Arabic is potentially a great opportunity, opportunities are often taken with more enthusiasm when done so voluntarily.

Emily Coburn, an Abu Dhabi-based Mum from the UK, tells us:

"I feel like there is this attitude from the kids that my son goes to school with, that because they have to do Arabic, they just do the minimum and turn up without feeling interested. That attitude has rubbed off on my son, even though I have tried my best to get him to be interested."

The UAE's Ministry of Education requires Year 1 - Year 10 students of non-Arab passports in private schools to attend a minimum of four Arabic lessons per week. Ahmed Aref, Head of Arabic at Brighton College Dubai, recognises the push-back this can create, and tells how he combats this:

"What we need to do is give students purpose for their learning. I ask them, 'if you were a CEO in your own company, and you have to hire one person out of two candidates – the first speaks two languages and the other speaks four languages, which candidate will you hire?' The pupils usually say they would hire the candidate who speaks four languages. We ask them why they would make this choice, and they say the candidate can communicate in more countries, in conferences they can translate for us. So, they see these benefits and the opportunity in front of them."

Mr Aref goes on to explain that providing students with a sense of control or agency can have a very positive affect:

"There is a framework in place of learning outcomes, but for older students, I ask them to decide the topics we will cover, I give them a choice of 4 or 5. Recently students were interested in learning about traditional marriages in different Arabic countries, and about applying for jobs using Arabic. This way, they have some control, they have to do Arabic but they can choose how they do it."

A Language of Many Dialects

The form of Arabic taught in schools is referred to as modern standard Arabic. This is the modern form of classical Arabic (the form used in the qur'an), which is typically used for official purposes e.g. in politics and the media. This style of Arabic is not used colloquially, and differs considerably to Arabic dialects that UAE students may hear outside of the classroom.

Teaching this style of Arabic in schools is not a practice particular to the UAE, it is taught academically across the Arab world, while colloquially, local dialects are used that can vary considerably from this.

The difference here in the UAE is perhaps the great variety of Arabic dialects in use due to the country's diverse population. This means there is no consistent Arabic dialect heard outside the classroom as students learn the language, as may be the case for a student of Arabic in Egypt or Morocco, for example.

There is a significant challenge created by the combined factors of Arabic being taught to all students from Grade 1 and new students continuously arriving in the UAE and entering school in every year group. A group of students starting Grade 10 will therefore have some who have been learning Arabic for 9 years and some who do not speak a word, with students of every stage in between, in addition to the usual range of abilities present.

This enormous diversity of abilities is simply not present in any other subject area, and puts heightened pressure on educators, requiring considerable differentiation of activities in order to avoid overwhelming or under-challenging learners. Of course, the success of educators attempting this will vary considerably from classroom to classroom across the country.

Ahmed Aref, Head of Arabic at Brighton College Dubai, explains how he handles this challenge:

"Students are grouped together in classes according to the number of years they have been learning Arabic, but we will still have a range of levels, and differentiate expectations within those classes. It is important that the tasks we set are not unmanageable, the level of challenge must be appropriate."

Mr Aref goes on to explain their practice for beginner students joining mid-year:

"When we have a student join us with zero Arabic, we try to bridge the gap as quickly as we can, so that they can go on to join a class of other beginner-level students. To do this, we work with them 1:1, with considerable focus to get them to this level where they can contribute. "

There is a perception among parent communities that Arabic is being taught in a conflicting style to other subjects within international schools. Indeed, in the case of schools following British, IB or other international curricula, it is challenging to source Arabic teachers who are trained in the teaching styles and methodologies of these curricula. This is particularly apparent when we consider the sheer number of Arabic teachers required to roll out Arabic programmes to Years 1-10 across the country; it is simply not feasible for every school to recruit teachers with the exact IB, or National Curriculum of England training they require.

Nord Anglia International School Dubai has taken the approach that its Arabic team must be integrated into its larger World Languages Department, undertaking the same training, and utilising the same systems and strategies. Head of World Languages, Louise Nolan, tells us:

"In terms of the teaching approach, what we are doing in Arabic mirrors what we are doing in Spanish, French, German or Mandarin. We’ve done a lot of work on the curriculum, and considered the research on cognitive load theory and second language learning, and we’re using this in our Arabic classrooms. We are lucky to have a team here at NAS who are willing to work hard, are open minded to new approaches and are able to find creative ways to meet our students’ needs."

Rasha Hijazi, GEMS Wellington Academy Al Khail, has taken a cross-curricular approach to ensure that learning Arabic is not a jarring experience for young learners. Collaborating with the school's drama, music and art departments, Ms Hijazi explained she has made the learning the language feel more accessible and enjoyable to her students. Ms Hijazi described an example of this:

“One topic that students learn is how to describe what they look like. We had the students act out a scenario, using what they’d learned. We set the scene that a thief came to their house in the middle of the night, and they saw the thief, so they had to give a witness statement to the police. The whole month they were learning to use language for this topic, they were waiting for the end performance exercise, they were so excited to do it.”

For families without any knowledge of the Arabic language, supporting their children in the subject can be challenging, leaving children to learn the language in isolation outside of school. Studies show that parental attitudes and involvement have a significant impact on educational attainment, for which learning a language is no exception. Ahmed Aref, Brighton College Dubai tells us:

"Parents must be mindful of the mindset they transfer to their children that if they are in the UAE temporarily, learning Arabic is not important. Learning a language is never wasted effort, regardless of where the family will live in the future."

GEMS World Academy Dubai has recognised this challenge and decided to take it on by creating a big push for parents to learn the language too, and found this has had significant positive outcomes. Rihabe Akerkedou told us:

“We did not stop at only teaching the children… we opened Arabic classes for parents too. Parents have told us that learning Arabic with us (twice a week) allows them to relate to their children’s situations in learning the language, and it also helps them to support their children at home.”