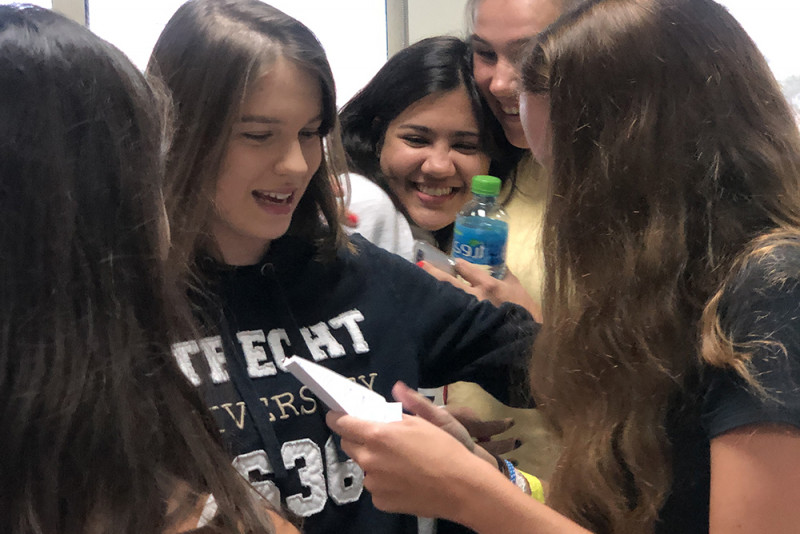 The IB results are out, and the UAE has, yet again, beaten the global average for the IB Diploma. Some 2,000 students from 38 schools in the emirates achieved an average of 32.26 – compared to the global score of 29.62. The UAE's 2019 results are also higher than the 2018 UAE average of 31.41. The minimum point requirement for the award of the Diploma is 23 points with the highest award 45 points.

The first set of results to be published have come from JESS Arabian Ranches (whose students are pictured above and immediately below) which has achieved a hugely impressive overall average of 38.00 compared with 35.8 last year, which was the highest in the UAE for 2018.  Following two further remarks, two further students, Holly Neille and Maia Roberts, brought to four the total number of students who achieved the maximum 45 points; Finley Bettsworth and Reuben Strobel (who came second, twice, in the WhichSchoolAdvisor Young Musician of the Year competitions in 2017-18 and in 2018-19) achieved these scores prior to the remarking process.  A further five students achieved 44 points - these were Diana Domingues, Fran Day, Luca Simic, Katie Birimac, and Seren Coulson. 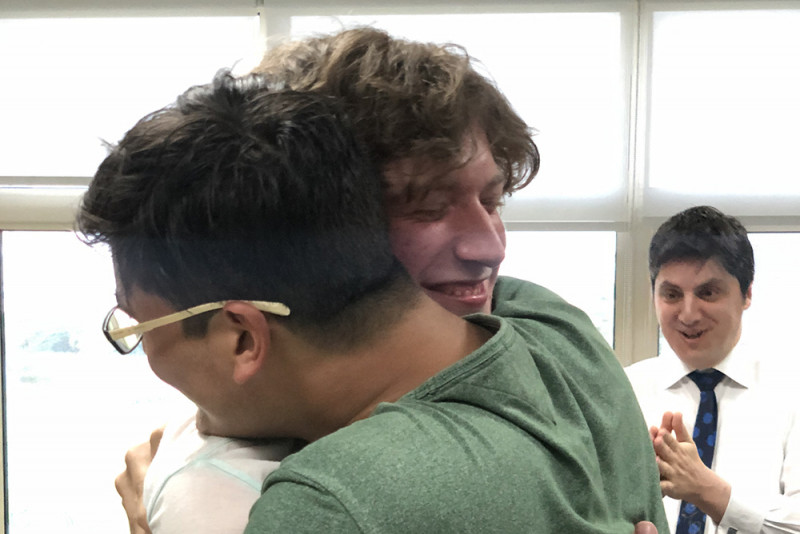 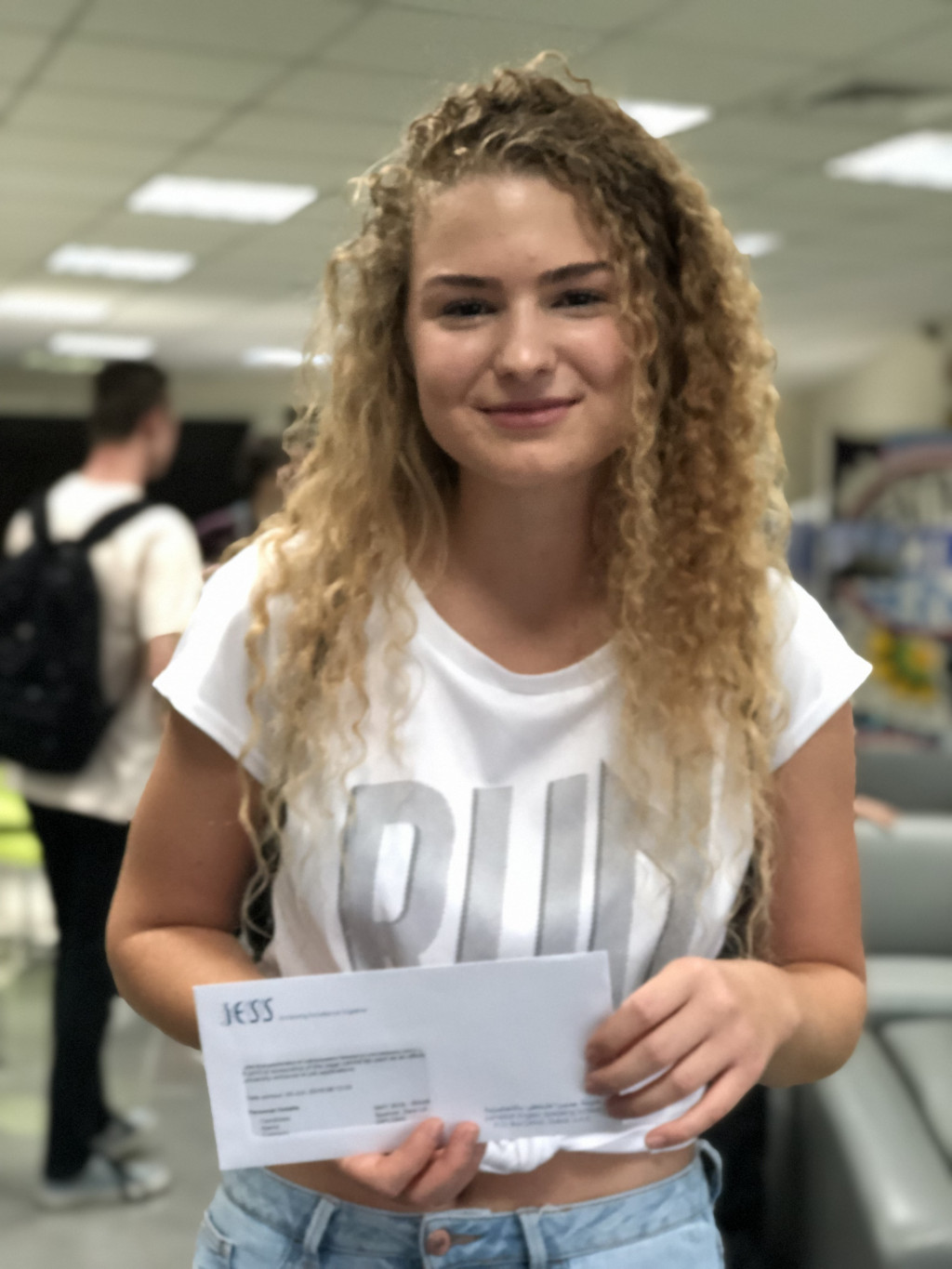 40 points is considered the minimum for entry to Oxbridge and the most competitive US Ivy League universities.

GEMS World Academy was the first GEMS school to send in the full set of results. It performed very well, with an average of 33.8, up from 33 last year. This is even more impressive given the size of its IB DP cohort. Some 80 candidates sat the exams, and 77 passed, a pass rate above 96%. Ten students achieved 40 points and above, 29 achieved 35+ points and in total 60 students achieved over 30 points.  These results included 8 students with access arrangements - the majority of whom were enrolled in the DP. The school informed WhichSchoolAdvisor.com that students' results far exceeded expectations and outperformed external testing predictions.  GWA students are going on to universities predominantly in the UK, US, Canada and Europe, including top universities such as Cambridge, UCL, Bocconi and UCLA.

Results for GEMS Wellington Academy Dubai Silicon Oasis were also released by the school.  Although the school did not confirm the number of Year 13 students, the pass rate was 91%, an improvement on last year's rate of 89%.  The average score for the school was 30 points.  Almost a quarter (24%) of students achieved 35+ points with the top score of 43 points being achieved by two students in the cohort.  Although full results will not be available until August, IBCP/BTEC students improved on last year's scores in subjects including Business, Creative Media and Sports and are expected to break records again this year.

First results from the Taaleem group of schools came from Greenfield Community School where students gained the highest scores in the school’s history in the Diploma and Career-Related Programmes.  In the Diploma Programme, 93% of students achieved the full Diploma, beating the school’s previous record by over 10% and with an average point score of 32 points, the students also set new records.  Two students achieved scores of 39 points with 59% achieving scores above 30 points.  Results across all subjects were impressive with students scoring particularly high in English, Biology, German, History and Business Management. There were also clear gains in Physics, Chemistry and Mathematics.

GCS has been a pioneering school for the IB Career-related Programme, which offers a more vocational route, and enables students of all abilities to undertake the IB programme.  GCS students have achieved a 100% pass rate over the past two years.

Raha International School, the sister to Greenfield Community School, has also reported strong IB results this year. 83 students were entered for the IB Diploma examinations, whilst 7 students took the IB Career-related Programme. 92% of candidates passed the IB Diploma, with an average point score of 31.7.  63% of students achieved 30 points or more, with 27% of students achieving 35+ points and 6% receiving over 40 points. The highest achieving student obtained 44 points - just one below the 45 points perfect number! Interestingly, 75 students are within one point of the next higher score and RIS anticipates significant upward changes on remarking.  Reflecting the very international background of RIS students and the global acceptability of the IB, university destinations include the UK, North America, Europe, Middle East, Asia and Africa.

At Uptown School Mirdif, the third of the four Taaleem schools offering the IB Diploma Programme, a total of 29 students took the IB Diploma examinations, with a further 12 taking the IB Career-related Programme. Of the IBDP candidates, 28 passed, with an average points score of 33. The highest individual points score was 43, with 5 students achieving over 40 points, 4 achieving 35+ points and 10 achieving 30+ points.

154 IBDP students and 10 IB Courses students  completed their studies at Dubai International Academy.  Not only did 45 students achieved a score of 38 points or more, but 81% of the graduating class exceeded the world average of 30 points. 30% of students achieved a score of 38 and above and the overall average for the school was 34.5 points. In addition 11 students gained a Bilingual Diploma in 8 different languages.Two students, Carl Vinter and Lilith Mayer achieved the coveted 45 points. Carl will be joining Copenhagen Business School to study Politics, Philosophy and Economics and Lilith will study Business Management at Warwick University, UK.

* The IB courses programme is a scaled down version of the IB Diploma programme, where students follow a more limited number of academic subjects, but do not take Theory of Knowledge, write an Extended Essay, or participate in CAS activities.

All 61 students at Repton School passed the Diploma Programme. Two students attained 43 points (in the top one percentile worldwide), with 90% of students scoring over 30 points, placing them over the global average and 47% students achieved 34 points. Overall, students scored an average of 34.0 points, equaling last year’s score at the school.  Additionally, two students achieved the much-coveted bilingual Diploma in French and English.

In addition, 100% of IBCP students at Repton successfully graduated from the programme having completed a Level 3 BTEC Diploma in Business within the IB Careers-Related Programme.  Furthermore, 100% of Emirati pupils who completed the examinations successfully earned their IB Diploma or IBCP certificate. Students will be joining universities including University of Toronto (Canada), St Andrews University, the University of Edinburgh and Kings College London (UK), as well as Emory University and the University of Michigan (USA), amongst others.

Deira International School, an Al Futtaim Education Foundation School, students recorded an improvement in their IBDP results this year, where 65 students sat the IBDP final examinations, achieving an average of 34 points in comparison to 33 last year. The pass rate of 95% (62 students) rose above the world average and, following a remark, the two top scorers achieved 44 and 43 points respectively. 15% of candidates achieved 40+ points which is a significant increase on the 6% from last academic year. 43% of candidates achieved 35+ points, again an increase of 11% in comparison to the last academic year, and 80% of candidates achieved 30+ points, an increase of 3%. Five DIS students also achieved a 100% pass rate in the IBCP, where they followed a BTEC subsidiary Diploma in Travel and Tourism.

At Aldar's Al Bateen Academy in Abu Dhabi - the only Aldar Academy offering the IBDP - the average point score was 32.4 with a pass rate of 92%.  This is the fourth year that Al Baten students have graduated following the IB Diploma programme, and the school again achieved year on year improvements in both the average points score from 32.2 last year, and the overall pass rate (up from 90%).  The highest individual score was 41 points by Keith Gironella, followed by Antonio De Leo with 40 points. Hamad Al Qubaisi and Alya Al Breiki topped the school’s Emirati cohort, celebrating scores of 37 and 36 respectively. University destinations include Claremont McKenna California, University of Surrey UK, UCLA Los Angeles, University of Bristol, and New York University Abu Dhabi (NYUAD).

Nord Anglia's sister school, the British International School Abu Dhabi (BISAD) reported improved results for its students.  15 students completed the IB Diploma Programme, with 14 achieving a pass - a pass rate of 93%.  The average points score was 33, well above the UAE and global averages, with the highest score by an individual student being 38 points.   In fact 40% of students achieved 35+ points and 80% achieved above 30 points. These students are now heading off to some of the top universities around the world and towards future careers as doctors, chemical engineers, biochemists and lawyers to name but a few.

Globally, an additional 2.11% of students participated in the IB Diploma exams  in May 2019 over the same time last year, with 623,000 exam papers in 72 languages marked by over 13,700 examiners who followed internationally bench-marked grading criteria across subjects to ensure consistency.

“I extend heartfelt congratulations to students worldwide receiving their results today. They have shown a thirst for knowledge, a determination to succeed and a conviction in their ability to take on their next best step equipped with high quality preparation. Higher education institutions and employers alike are telling us we need young people who can collaborate, communicate and think critically while creating new knowledge. Research suggests that an IB diploma prepares students with these skills. Our alumni are addressing the challenges humanity face with open-minds and creativity. I wish this year’s graduates all the best for the future and for making our world better”.

Set up originally in the 1950's to offer a transferable education for children of Diplomats working for the UN, the IB Primary Years Programme (PYP), Middle Years Programme (MYP), Diploma Programme (DP) and the more recently added Career-related Programme (CP) - which is often linked with other external vocational qualifications -  have increased in popularity around the world in recent years. Between 2012 and 2017, the number of IB programmes offered globally has increased by 39.3%.