Nothing is impossible
“We, in the UAE, have no such word as “impossible”; it does not exist in our lexicon. Such a word is used by the lazy and the weak, who fear challenges and progress. When one doubts his potential and capabilities as well as his confidence, he will lose the compass that leads him to success and excellence, thus failing to achieve his goal. I require you, youth, to insist on number one.”
HH Sheikh Mohammed bin Rashid Al Maktoum
Vice President and Prime Minister of the UAE
Palm Jumeirah
Dubai, UAE 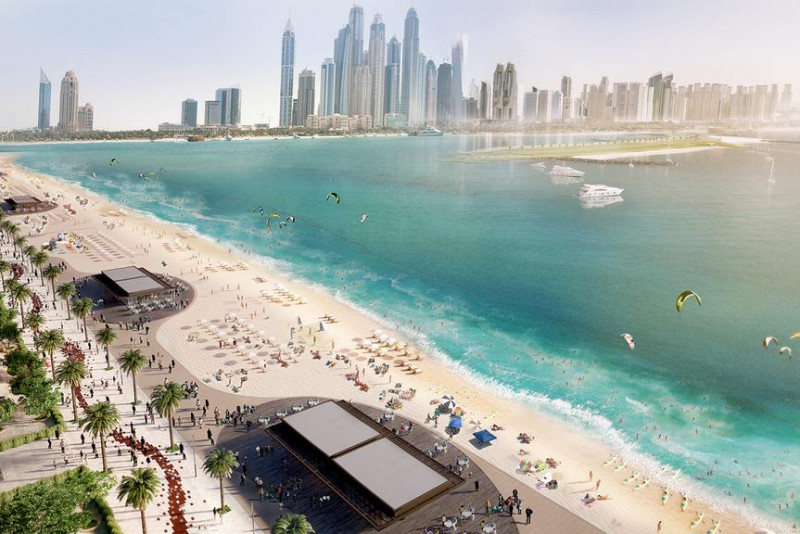 The Palm Jumeirah was one of three planned palm shaped developments built up from reclaimed land, but may be the only one to be realised - in our life time. Palm Jebel Ali is apparently back on the drawing board after being shelved in 2008 but will take at least 20 years to be where Palm Jumeirah is now, while Palm Deira has been reduced in scope to Deira Islands and no longer really looks like a palm at all.

Rents had been falling for some time, although have now begun to rise again. This is a premium location, and empty plots are disappearing fast. The community is located off Al Sufouh road, and is close to Dubai Marina and JBR, but without the latter's manic traffic issues. It is in the heart of new Dubai, and yet as you drive onto the main trunk road of the Palm, it feels like you're escaping it.

One reason for the lack of congestion is that the "island" does not have any schools. Retail outlets were at a minimum - although this has changed significantly with the opening of Nakheel Mall. Originally set for 2016, it opened at the end of 2019, and at the time of writing has yet to fully open the top floor. The Golden Mile Galleria is dysfunctionally functional (it's open, but many units are unused) and does offer a Spinneys, as well as a number of cafes.

There are now a number of medical centres, and dentists. Al Das, now on the trunk in the final Shoreline building, and a hospital (Emirates Hospital) and two dental clinics in the Golden Mile.  There is also now a specialist sports practice in the Golden Mile.

The (relative) lack of facilities has given the Palm a more relaxed atmosphere than some of Dubai's other developments, and a walk in either the park that runs along the centre of the trunk, or along the beach, reveals a highly family focused community. Kids really love living on the Palm - and why wouldn't they with the park, and a beach on either side of the road.

There is an ever expanding number of luxury hotels, the most celebrated - but far from the most luxurious or upmarket - being the Atlantis hotel, which hosts Aquaventure, a 42-acre water park. There will soon be an Atlantis 2, and a St Regis in the huge tower on the middle of the trunk. With so many 5-star hotels there are a myriad of fine dining outlets.

Relaxed, cafe style dining is available in the Golden Mile, in the Mall. There are bar restaurants in the beach side Shoreline apartments, in Club Vista Mare, on the West Trunk. The Golden Mile development offers Wagamama, Shakespeares and a whole host of smaller eateries. There is also a Starbucks, and a Cafe Nero. The Organic Supermarket also has its own cafe, which did a fab breakfast at only 39 AED until the arrival of Covid-19. It has reopened.

Restaurants, including Aprons and Hammers, Jones the Grocer and Senor Pico have now opened up on the West Beach promenade, while Nakheel Mall offers Din Tae Fung, Le Pain Quotidien, Shake Shack amongst a growing number of others. The few, apparently very good, top floor restaurants are licensed. On the roof there is also a very large nightclub with outdoor bar.

At the end of the trunk, The Pointe offers more mid-tier dining options. The Pointe's restaurants are licensed. It also has fountains - the world's largest according to some obtuse calculation... Visitors often marvel not only at how beautiful some of the restaurants look, but also how quiet it can be mid week. Let's hope the new Monorail stop adds to the numbers.

The Palm is undoubtedly a great place to live, and its sense of incompleteness is coming to an end. For an upmarket community, Nakheel needs to spend more on "the bits inbetween" - the pavements, the access roads, the signage - that combined ease pedestrian and vehicular traffic, and give a sense of prestige to a development. Critique aside, the Palm has a more relaxed vibe without the hustle and bustle, and traffic of nearby JBR. A great community for young families, but one that comes with a fairly hefty price tag.

The Shoreline. The main apartment blocks you see as you drive onto the Palm, and probably the most underrated. Living in the Shoreline gives you access to a wide stretch of beach - well over 1km long, whether you live on the left or right (garden facing) side of the road. The development includes a number of gyms on the right side, and residents can use any of them. There are swimming pools running along the shoreline beach. The left hand side of the development is considerably better value than the right. The same F Type (the largest 2-bed apartment) will cost approximately 2 million AED on the garden facing side of the Shoreline, and 2.5 plus million AED on the sea facing. That is, you pay ).5 million plus AED for a (pretty special) view of the sea. Rents reflect the differential. Shoreline apartments are relatively large for new Dubai. The F type is above 2000 square meters.

Golden Mile Apartments. Built later and said to have a better finish than the Shoreline, Golden Mile apartments are however smaller, and do not have access to the beach. Moreover, their unique selling point - the Golden Mile of shops, cafes and restaurants is a little limited and far from full. Some apartments had a great view of the JBR, Marina area. Not any more with construction beach side. Approximately the same rent and price as the Shoreline.

Marina Residences. Very good finish. Many have great views over the Marina and onto the fronds. No beach access, and, oddly, no direct access to the marina itself. However, there are tunnels that lead directly from the Marina apartments to the Palm Mall. Apartments are again smaller than similarly priced Shoreline apartments. Swimming pool and gym between each two buildings.

Tiara/Oceana. The most resort like apartments on the main trunk, and were the most expensive by a margin , save perhaps V or Five or whatever it is called this week. Great outdoor area with a large swimming pool and bar/restaurant. Oceana has the West 14 restaurant, one of the best steakhouses in the city. Oceana is also said to have better views than Tiara (although both are pretty stunning), and is more popular.  Note, Club Vista Mara has been built directly in front of the building facing the shoreline... For floors 1-3 there go the views...

Five. Currently (it never lasts long) the fanciest place to live - on the trunk and will be until its neighbour, The One, opens next door some time in 2020.