Nothing is impossible
“We, in the UAE, have no such word as “impossible”; it does not exist in our lexicon. Such a word is used by the lazy and the weak, who fear challenges and progress. When one doubts his potential and capabilities as well as his confidence, he will lose the compass that leads him to success and excellence, thus failing to achieve his goal. I require you, youth, to insist on number one.”
HH Sheikh Mohammed bin Rashid Al Maktoum
Vice President and Prime Minister of the UAE
Business Bay
Dubai, UAE 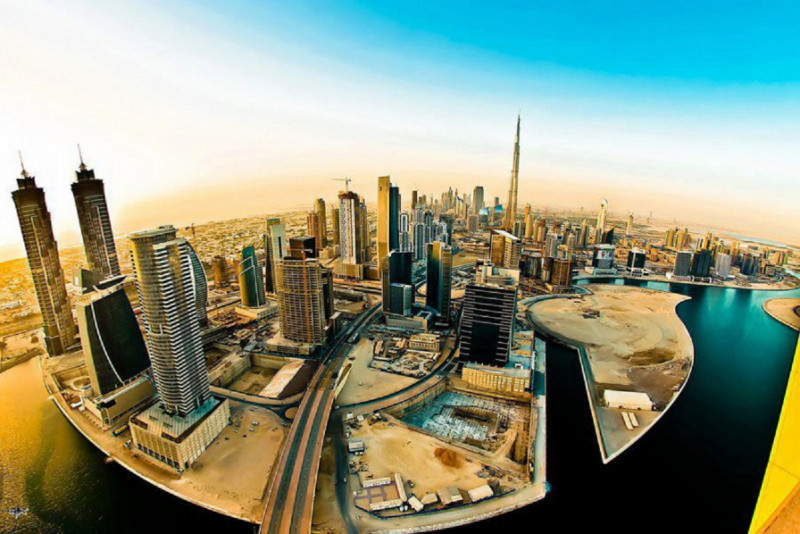 A rough in the diamond. If the financial crisis of 2008 had never happened, Business Bay would probably have been another Dubai Marina already, only bigger and better: Sky high towers, surrounding a fairly manicured series of waterways; where Business Bay Brians would sip coffee and discuss important matters, such as what they were going to do on the weekend.

As it is, large parts of the area, increasingly so towards Al Khail Road, are very much still "under construction", and away from the Metro station where it's 'approaching' developed status, things like coffee shops are more of a promise, rather than a reality.

That is not to say the area is the Wild West - far from it. Many projects have been seen through, and Business Bay already contains some pretty spectacular buildings. The JW Marriott Marquis Dubai Hotel is the world's tallest hotel, a 72-storey, 355 m twin-tower skyscraper that cost a not unimpressive AED1.8 billion to build. However, for all the elegance within, the views, from all towers, are pretty much all still straight onto construction chaos - even if there are views of say, the Burj in the distance.

Since the Dubai Canal project investment has been on steroids. You can see evidence of this just by driving down Sheikh Zayed road. Al Habtoor must have sunk his family fortune into the redevelopment of the Metropolitan into the St Regis, and W hotels... These have pretty much been built (although the residential towers are still rising).

The Marquis, visually, is not the most appealing tower in the area. The Ubora Towers would be up for an award, especially amongst architects that like things bendy and leaning, while Swiss Cheese Tower, official name O14, looks like a very substantial block of Elemental, and oddly cool. Apparently its eco-friendly too - but by accident rather than design. We love the W you see from Sheikh Zayed road, but the ornate Roman St Regis itself we could leave rather than take.

Most searches for property in Business Bay will, however, return the Executive Towers apartments. That's because there are 12 of them. There are 10 residential towers (45-50 floors high), one commercial tower known as Aspect Tower, and one hotel tower known as the Executive Hotel Tower. They were the first buildings to be completed in Business Bay.

Reviews on them are pretty mixed. Residents like the facilities, but complain about the constant the noise of very nearby construction. Facilities include the Bay Avenue shopping mall on the first two stories of a podium that connects all the Executive towers. The third level (Plaza Level) is called The Courtyard, and contains communal facilities. There is remarkably little commentary on Bay Avenue thus far despite the fact, according to reports, there are some 140 retail outlets in the mall.

Business Bay is slowly growing into something pretty magnificent. It is meant to be Dubai's CBD - central business district, and a bit like Manhattan. As the brainchild of Sheikh Mohammed himself, it is unlikely to be a project pushed under the carpet. It is clearly benefitting from the 2 billion AED, three kilometre long Dubai Canal project, and residents can already walk all the way to the Arabian Gulf, crossing past Safa Park and Jumeirah.

The canal is also expected to help lower temperatures in the area, important to an area like Business Bay which will otherwise bake in concrete.

Unsurprisingly there are no schools yet in Business Bay, but there are many in the areas immediately surrounding it. In Al Quoz, right on the doorstep, you can find Al Safa Private School, Dubai International School and Our Own Indian School. Across Sheikh Zayed Road in Al Safa you can find even more - JPS, Emirates English Speaking School and Jumeirah English Speaking School, for example. These are all good schools with a good reputation. Getting to any of these schools should take no more than 10 minutes.

Pre-schools, which should be closer, will, however be more of an issue. Many parents would head towards Downtown, however this area itself is not exactly blessed with KGs.

Business Bay will eventually turn into something special. Join the area now however, and you do as a pioneer. For investors that may make good sense. If you're just renting however, make sure you're getting a good deal, and that the conveniences you need near you, are not inconveniently distant. Make sure also your apartment has good sound proofing, and that you really don't mind the dust...