Nothing is impossible
“We, in the UAE, have no such word as “impossible”; it does not exist in our lexicon. Such a word is used by the lazy and the weak, who fear challenges and progress. When one doubts his potential and capabilities as well as his confidence, he will lose the compass that leads him to success and excellence, thus failing to achieve his goal. I require you, youth, to insist on number one.”
HH Sheikh Mohammed bin Rashid Al Maktoum
Vice President and Prime Minister of the UAE
Arabian Ranches
Dubai, UAE 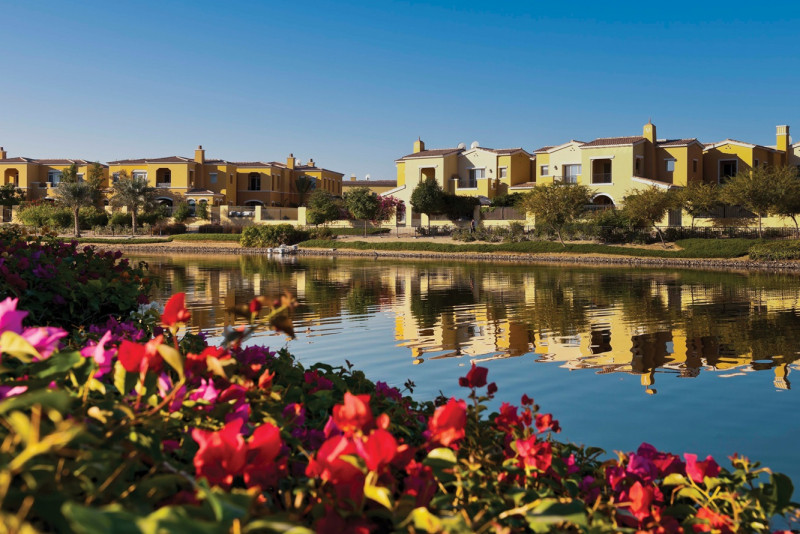 Arabian Ranches is one of Dubai's biggest gated communities with a perimeter of around 10 km (and growing). It's also one of its most established, which on the positive side means that it is greener than most and actually has pavements, plants and trees; while on the negative, older villas may have structural issues. Do your due diligence.

Developed by Emaar the development has however, for the most part, been very thoughtfully done. Its centrepiece is the Arabian Ranches Golf Club, formally known as The Desert Golf Course - an 18-hole, par 72 course designed by Ian Baker-Finch in association with Nicklaus Design. The community also has its own Polo Club, and community centre.

Because it is a big community, it is very self-contained with many residents saying on a weekend they have little need to leave. Arabian Ranches has tennis courts, basketball courts, pools, and a lake (good for cycling and skating around) as well as its own medical centre and shopping facilities (supermarket, Pizza Hut, book store, Costa, Burger King...). The golf and polo clubs provide more "refined" dining opportunities, although are still fairly low key, and are licensed...

Arabian Ranches has its own school, and a very, very good one at that - JESS Arabian Ranches. However, please do not move to Arabian Ranches and expect to get your child into it. The UAE does not work on the basis of locality and the school has traditionally been over-subscribed with a long waiting list and corporate debentures which eat up places. Note: This is less the case now than ever with a multitude of premium (priced) schools opening up in the emirate, but JESS remains difficult to get into. You can check availability here. Within the community there is also Ranches Primary School, which opened in 2015 but already rated a Very Good school by the KHDA, the emirate's regulator.

A little further afield, Nord Anglia opened in Al Barsha South in September 2014, a few minutes drive away, and is a fantastic alternative as a secondary (currently rated Very Good by the KHDA). GEMs World Academy is just a little further up the road.

In the past Arabian Ranches was said to be fairly disconnected from the rest of Dubai, but today that is more difficult to claim. Still, if you want to get anywhere you do need four wheels and an engine. The area is connected by bus, and - one day - it will be connected by the Metro along Emirates Road, but don't hold your breath. For now, real freedom comes in the form of a car. For those over 17/18 with a license, it's 15 minutes drive to the Dubai Marina, 25 minutes to DIFC and a 20-minute drive from TECOM. It's also a 15-20 minute drive to the airport. *Subject to traffic!

Parts of the community are almost now in touching distance of leisure and dining options. Literally next door, in Dubai Studio City there is an Irish Village, and even an Oyster restaurant and bar, The Maine Street Eatery, on the ground floor of the Studio One Hotel. Residents living in the Mirador La Coleccion, for example, could walk there in 20 minutes, or take a 4 minute car ride (hey, this is Dubai)... Slightly further afield (slightly) Motor City is fast becoming a retail and restaurant hub...

Because it is gated, safe, quiet, and with a large number of sport and recreational facilities Arabian Ranches is a big draw for families. Parents can largely chillax, and let their kids out to explore their universe without worrying about traffic, roads, cars or other 21st century issues. Kids safe = parents happy.

Within Arabian Ranches, there are a number of communities. There are differences between them, in terms of the villa style (Arabic, Portuguese, Spanish and so on, even if the types of villa, the layouts, are shared).  There are also differences in which type of villas are built in the sub-community, plot sizes (which will affect community charges), and the spaces and facilities within each. If you are trying to determine which to choose, also think about exit points, and proximity to shops, cafes, schools, etc. Saheel would be closer to the community centre for example, Mirador La Coleccion the exit to the wider world.

Arabian Ranches is something of an attraction in and of itself, and as a result the community keeps on growing (Arabian Ranches 1,2,3...), while newer communities are bubbling up around it, benefitting from its proximity...