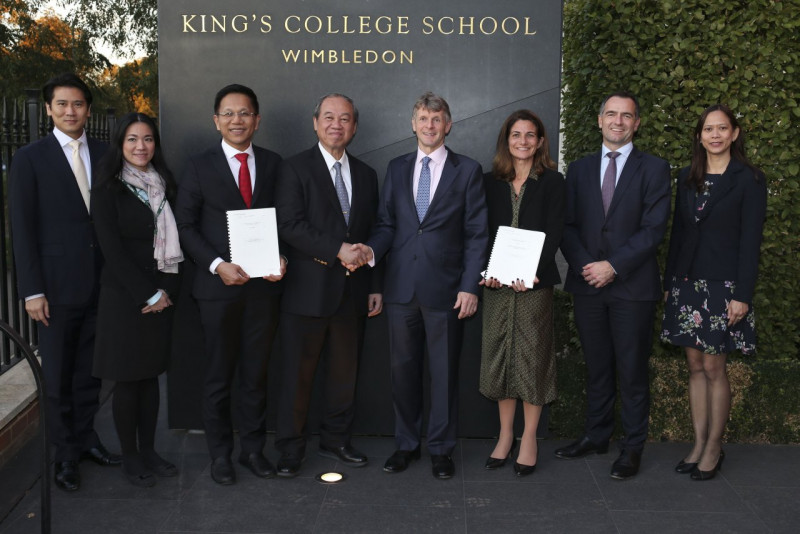 King’s College School, Wimbledon opened an international school in Bangkok in 2020 to offer a typically British education to locals and expats.

The school is initially open for pre-nursery to Year 6 for the 2020-21 academic year, and it will roll out Years 7 to 12 by 2026. At full capacity, there will be a maximum of five classes in each year group, and it certainly has a grand-scale campus to accommodate such numbers.

Since Harrow first opened an international campus in Thailand in 1998, leading independent schools such as Bromsgrove, Rugby, Shrewsbury, and Brighton College have followed suit and opened campuses across the country.

Demand for high-quality, English-medium education remains high in Thailand – both from expat families for whom the local education system is often inaccessible and sometimes inappropriate, and from local families who see it as a ‘passport’ to a place at a British or Western university. So, a school such as King's College, Bangkok – which brings with it a  reputation for academic excellence, discipline, pastoral care, and an emphasis on extra-curricular activities – has huge potential to succeed as a new school here.

The campus in Ratchadaphisek-Rama III Road follows two openings of King’s College schools in China in 2018. King’s College is clearly succeeding internationally, which would suggest that the Bangkok school has plenty of expertise to draw from. King's Bangkok may have opened during one of the most turbulent times in education but, unlike some other new schools worldwide that have delayed opening, the school welcomed students on time and on a completed campus.

Early years classes are taught by at least one fully qualified international teacher; every class has an assistant teacher fluent in both Thai and English to help students who are learning English as an additional language. Specialist lessons include music, Mandarin, music, and sport.

From Year 1, students continue to follow the National Curriculum for England, which covers the core subjects of maths, English, and science, as well as geography, computing, history, PE, swimming, music, and art. One of the key differences to the curriculum offered by its UK school is the teaching of Mandarin, and King's Bangkok says that it "places literacy and language development at the centre of our curriculum in the junior school".

Once the secondary school opens in 2021, students will study for IGCSEs and A Levels. Unlike its UK school, the Bangkok campus will not offer a choice of A Levels or IB Diploma at sixth form.

King's College's academic credentials are impressive, and its GCSE, A Level, and IB results are consistently high in the UK. It was ranked as the Top Boys/Co-educational School in London in 2019 by The Sunday Times. This isn’t enough to guarantee the strength of the education offered by King’s Bangkok, but it does help to set a high standard for the school to follow.

Are you a parent, teacher or student at King’s College International School Bangkok?
Take a survey arrow_forward

Whether the quality of education can compare to the original UK ‘brand’ is a question that needs to be asked of any UK school opening internationally. As with many British schools opening overseas, King’s College is lending its name and educational expertise, with a local partner (the Saha Group) developing and running the school.

"We have genuine input from King's College School, Wimbledon to ensure that we can mirror the success of one of the UK's best schools.”

As you'd expect from a UK public school, there is a full choice of clubs and activities that take place beyond the academic curriculum and usually outside the classroom. King's Bangkok has a compulsory rotation of activities built into the timetable on the last lesson on a Monday and Friday, and extra-curricular activities are offered from Reception onwards.

Students have the opportunity to make full use of the school's impressive sports facilities, taking part in football, gymnastics, swimming, and basketball, among many others. And the 600-seat auditorium for music and drama productions, as well as mini concert halls, provide plenty of space for students to explore the arts.

The founding principal is Thomas Banyard, who previously worked in the leadership teams at King's College School in Wimbledon, UK and Hangzhou, China; this means the school will be led by someone very familiar with the 'brand'. Banyard's two daughters will attend the school.

There is a standalone early years centre for students up until Year 1, which is fully equipped with classrooms, large playgrounds, bicycle tracks, a cooking room, an early years swimming pool, and a splash area; students also have access to a dedicated area in the main library.

King's Bangkok is a selective school, and all students must pass an assessment to be accepted. It's also one of the most expensive international schools in Thailand, but its fees are on a par with other UK public schools here.

Annual tuition fees range from THB 508,000 in pre-nursery to THB 795,000 in Year 7, which includes lunch, morning, and afternoon snacks, and co-curricular activities, clubs and, societies.

The admissions team will not have an easy job as King's Bangkok enters an international school scene already filled with several UK public school exports. While it does offer an impressive campus, solid UK education, and close links to King’s College School, Wimbledon, what will make King's Bangkok really stand out? Once the school opens, we will be watching with interest.