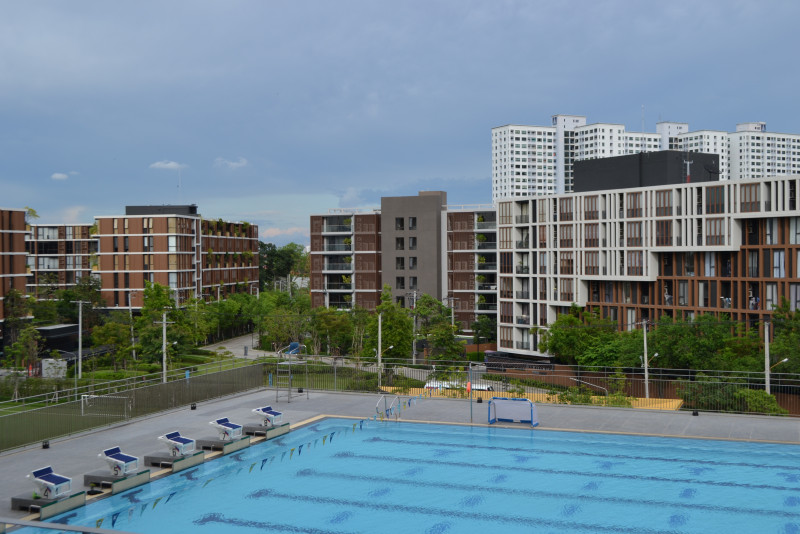 Bangkok International Preparatory School has opened a brand-new campus dedicated to its secondary years; it marks a new era for this popular British school with state-of-the-art sports facilities, additional subjects at IGCSE and A Level, and a timetable of “deeper learning”.

Bangkok International Preparatory School ushers in a new era of secondary education at its new campus in central Bangkok. This well-established school has provided a British education to children from nursery through to sixth form for the past 15 years at its campus in Sukhumvit 53. The school opened a new secondary campus at Sukhumvit 77 in August 2017, which means that Bangkok Prep’s original campus is now dedicated to the early years and primary school, while the new campus is exclusively for Years 7 to 13. This is good news for parents looking for a place at this sought-after city centre school, as there will be an extra 400 places in the secondary years. What’s more, the new secondary school is equipped with some enviable academic, arts, and sporting facilities specifically for students aged 11 to 18 years.

Bangkok Prep follows the National Curriculum for England and offers classes from Years 7 – 13 at its campus in Sukhumvit 77. Founded in 2003, this is a school that’s become hugely popular with expat and local families alike; there’s a population of around 800 students representing more than 40 nationalities, with 55% non-Thai students and the remaining 45% Thai students.

There’s a strong sense of Britishness here: the majority of teachers are from the UK, the academic year runs from August to June with three terms, and students work towards taking IGCSEs and A Levels. From August 2016, the school introduced the Extended Project Qualification (EPQ) for Years 12 – 13, which is part of the UK’s AQA Baccalaureate. An education at Bangkok Prep also features a world languages programme, a strong focus on competitive sport, and eco-friendly initiatives.

Are you a parent, teacher or student at Bangkok International Preparatory School (Sukhumvit 77)?
Take a survey arrow_forward

Bangkok Prep has always been a mid-sized school with a very close-knit community; this is largely due to the presence of an active and highly valued parents’ association called Friends of Bangkok Prep’ (FOBP). While it’s early days for the secondary campus, we would expect FOBP to be just as active here. As the school says,

“The role of FOBP is vital to the good function of the school – parent volunteers are a visible presence on campus both helping out with events and helping in the classroom.”

The curriculum
Secondary education at Bangkok Prep follows the National Curriculum for England throughout the Key Stages 3, 4, and 5, and focuses on the core subjects, science, creative arts and design, a wide range of modern languages, music, PE, ICT, and PSHE (Personal, Social, and Health Education). Students have a very well-rounded education and the weekly timetable balances academia, creativity, and sport. It also includes a world languages programme, which gives students the opportunity to learn two languages from a choice of Japanese, French, Mandarin, Spanish, and Thai.

In Year 12, students can select three to five A Level subjects, in addition to the compulsory core curriculum of PE, Physical PSHE, and community service; Thai studies for Thai students; and the Extended Project Qualification (EPQ). The EPQ is part of the AQA Baccalaureate, which is a British qualification that complements A Levels with community service, a research project, and an additional AS level in critical thinking, global perspectives, or general studies. The school explains its decision to introduce this to the curriculum by saying,

“Universities support and value the EPQ as evidence of a student’s ability to use a range of skills that are vital for successful study in higher education – including development of independent learning, self-management and research ability.”

As well as graduating with A Levels, students leave the school with a Bangkok Prep High School Diploma, which is graded on academic success, extra-curricular activities, and community service.

Since moving to the new campus, Bangkok Prep has made several changes to its secondary curriculum. The school day remains the same ­– 8am until 3.20pm – but lessons have been extended to 60 minutes to allow for “deeper learning”; head of secondary Nigel Wilsonlock says that “moving from seven to six lessons in the day will ensure there is less disruption to the flow of learning”.

Other changes include an enrichment programme for students who need extra help in specific academic areas; the introduction of new subjects at IGCSE and A Level, including Spanish, photography, graphic design, gymnastics, media studies, human biology, astronomy, food technology, statistics, film-making, sport science, and dance; and an in-school assistance programme that gives Year 12 and 13 students the opportunity to volunteer in the administration department or a class of their choice.

With an average class size of 22 students, the school is able to offer a more personalised learning experience; because of its small class sizes, teachers can tailor the education to every child’s needs. It also focuses on “active, hands-on learning where children utilise first-hand experience and learn through doing rather than simply observing or listening.” The school plans to increase this creative and innovative approach to learning by developing new ‘breakout’ spaces throughout the campus.

Beyond the classroom
As well as organising residential trips in Thailand for all year groups, the school strongly encourages students to engage in community service projects, and it runs various environmentally-friendly initiatives. In 2017, the school received the Eco-Schools Green Flag, a global award for excellence in environmental education, and it continues to run various eco-friendly initiatives across the school. One of these is an organic farm that supplies a variety of fruit and vegetables to the school kitchen. The school works with the charity Folkrice to give “students opportunities to learn how to grow plants organically”.

There’s a secondary student council with elected reps from each year group, and every student belongs to one of four houses that compete against one another in events such as sports’ days, swim galas, and quizzes. After-school, there are more than 150 extra-curricular activities, ranging from bowling and tennis to photography and rock band; there are also specialist training programmes in swimming, basketball, football, and badminton.

The school has a very competitive streak and, as a member of TISAC (Thailand International School Activity Conference) and of FOBISIA (Federation of British International School in Asia), Bangkok Prep students take part in national and regional sports and academic tournaments every year. Now that it has the additional sports facilities, the school has launched the Bulldogs teams in volleyball, gymnastics, tennis, cross-country, climbing, and touch rugby. In the school’s own words,

“We are one of the leading schools with top placements in sailing, basketball, swimming, football and badminton”.

Results
Bangkok Prep has a strong academic record. In the 2018 IGCSE results, 88.8% achieved A* – C grades, and 49% scored A* – A; 91% of Year 11 students achieved the school’s minimum entry requirement to the sixth form with five or more IGCSEs graded A* – C.

At A Level, 99% of grades awarded were at A* – E, with 68.8% at A* – B, and 55% of the cohort achieved three or more A*/A or B grades. 50% of Bangkok Prep students took a university place in the UK; other popular destinations were the US, the Netherlands, and Thailand.

The campus
Located close to the On Nut BTS station, the new secondary campus is like a breath of fresh air for Bangkok Prep’s senior students. Since moving to the new site in Bangkok’s Watthana district, which is less than 3km away from the original campus at Sukhumvit 53, students have reaped the benefits of extra space and new facilities that are designed specifically for secondary education.

As well as modern classrooms, the school now boasts some very impressive creative arts facilities, including a photography darkroom and studio, black box theatre, two iMac suites for music and art, a music recording studio, and a ceramics room.

The campus is located at the heart of a gated residential community, and is within walking distance of a trendy shopping mall. The school runs a regular shuttle bus between the two campuses.

Admission and fees
Tuition fees at Bangkok Prep are just above average, and range from THB 540,000 in Year 7 to THB 602,000 in Year 12 for the 2018-19 academic year. The school continues to offer scholarships to students in Years 10 – 12 who display outstanding achievements and potential in academics, sport, or the creative arts.