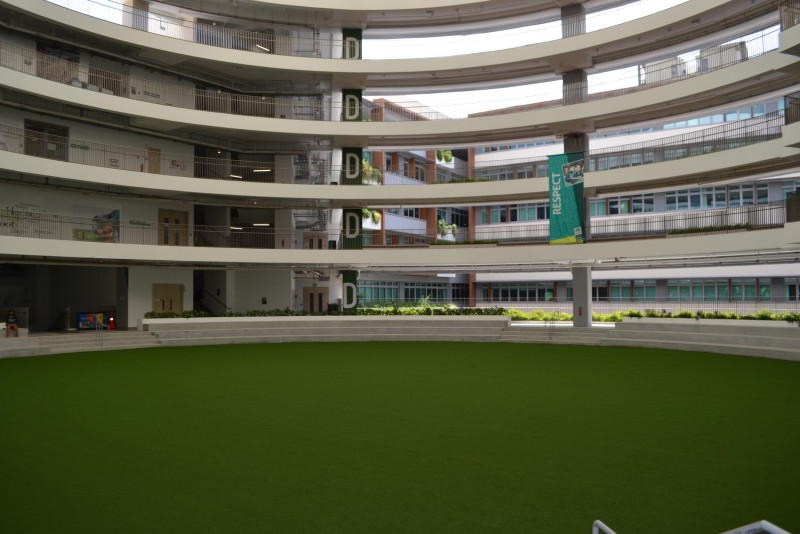 Located at a well-equipped and modern campus in Bukit Timah, the all-through GESS offers students the choice of a German or IB education.

GESS is a multilingual, not-for-profit international school that offers two curriculums under one roof. This IB World school for students aged two years to 18 years provides German and English streams – and offers an education that is deeply rooted in European culture and values.

GESS has gone through several changes since it was founded in 1971. It has branched out from its German curriculum with the addition of an IB English stream in 2005 and it moved from two separate campuses to one purpose-built site in Bukit Panjang.

Today, GESS is very much a European school, and it is living up to its tagline of ‘European Foundations For Tomorrow's World’. There is a 50:50 split between the English and German streams, a student body of more than 65 nationalities, and a wide choice of European language programmes.

One of GESS’ distinguishing features is the recently established Junior Engineer Academy, which is the only one outside Germany and other European countries. It’s encouraging to see a school expose its students to engineering from such a young age, and equip students with the skills needed to enter the technical and engineering sectors.

The school moved to a new purpose-built campus in Dairy Farm Road in 2018, bringing the school’s pre-school, primary school, and secondary together under one roof; the school community has the capacity to grow to 2,000 students.

Curriculum
Since 2005, GESS has broadened its appeal by offering both the German curriculum and the popular IB programme in English. So, as well as being the only international school in Singapore to teach the Konferenz der Kultusminister, it is also a popular choice for families wanting to take the IBDP pathway.

“As much as possible, we try to keep an even balance between the two streams. It’s never skewed in favour of one.”

Core subjects across the school include maths, German, English, social studies, science, art, music, and sport. However, the two streams of education are distinctly different, each with their own appeal to families of different nationalities.

All students enter the same pre-school curriculum (two to five years), which is built on the IB Primary Years Programme (PYP); instruction is in both English and German.

The German stream follows the German school curriculum, based on the curriculum of Baden-Württemberg in primary and Thüringen in secondary, and offers all German school leaving certificates. It’s ideal for German expats who plan to return to their home country for schooling or further education. Students are streamed into three different academic tracks (Gymnasium, Realschule, Hauptschule) based on their ability and needs. The language of instruction is German, and English is taught on three differentiated levels.

The English (or European) stream follows all three International Baccalaureate programmes – the PYP, MYP, and the IBDP – from primary through to secondary. GESS is one of only seven international schools in Singapore to offer all three IB programmes. Although each IB programme has a standalone framework and curriculum, students with an MYP and PYP background can find it easier to meet the varied demands of the DP. For example, the experience of can equip students with the research skills need for the DP’s Extended Essay.

IB students study in English and study German as a second language from Grades 1 to 10. Students also have the opportunity to learn a third language – French, Spanish, or Mandarin – as they progress through the IB programme. Another distinguishing feature of this school is its Danish and Dutch Mother Tongue Programmes, which are offered within the IB programme. This will appeal to any families planning to return to the Netherlands or Denmark, or enrol in a university there.

GESS makes a real effort to bring together what could be a school of two halves into one. Both the German and European streams follow the same academic year, wear the same uniform, and are encouraged to study and specialise together in after-school activities, break times, sports clubs, seasonal celebrations, and assemblies.

“There is plenty of collaboration between the students and teachers in both two streams. Regardless of which curriculum you are studying, you will benefit from the different perspectives of the IB and German curriculum.

“We’re also focusing on introducing more programmes like the Junior Engineer Academy, which bring together students from both the IB and German streams.”

Are you a parent, teacher or student at GESS?
Take a survey arrow_forward

Most recently, GESS introduced a new Middle School electives programme for students from Grades 6 to 8; there is a choice of arts, outdoor education and fitness, and computing and design technology. This is not about assessment or grades but rather about encouraging children to explore various talents, interests and passions.

Learning at GESS extends beyond the academic, and music and sport are both an integral part of the curriculum.

In both the IB and German streams, all Grade 3 students have an eight week-long string programme which introduces them to violin, viola, and cellos in ensemble classes. Grade 5 students in the German stream also have the advantage of learning a wind instrument.

GESS runs a Vocal and Instrumental Programme (VIP), where students can learn a musical instrument in a 1:1 lesson during and after school hours. To encourage students to sign up for lessons, the school recently ran a Try An Instrument Week, and it invites VIP students to perform recitals in the auditorium at the end spring term. Testament to the school’s strong creative streak, it’s encouraging to hear that 200 students have enrolled in the VIP so far.

“Families are really seeing the value in enrolling in this as you get individual tuition from a professional, which is catered to your interests whether learning to play an instrument or to sing.”

In terms of sport, there’s a dedicated PE block with impressive facilities, the school runs a variety of sports clubs, and it fields teams in tournaments run by the Athletic Conference of Singapore International Schools (ACSIS).

All class groups are taken on educational trips, local and international, but this does differ between the German and European streams. Also, service is an integral part of the curriculum; all students support long-standing charitable projects through various fundraising initiatives, and through the school’s Think Global, Act Local programme, students apply what they learn in the classroom to real world issues.

The school also celebrates its Singaporean and European roots by organising events such as an exchange programme with local schools, author visits, and master classes with a chef from Germany.

Students from Kindergarten up to Grade 12 can sign up to two co-curricular activities per week, and there is a choice of more than 90 different clubs covering a variety of disciplines from sport, music, creative arts, performing arts, science & technology, and life skills. Some classes are in both German and English to support its bilingual curriculum.

“It’s a rigorous programme, and is only for students who are really interested in engineering and who want to pursue a career in this field. We want them to build a green wall on campus using what they’ve learnt in this programme.

“We want a gender balance in the programme, and we want to remove the barriers and show that engineering is not just a male dominated industry. We want to make it easier for female students to break into this field.”

There’s a strong focus on language learning too. As well as after-school mother tongue programmes in English, German, Dutch, and Danish, primary students can sign up to one of nine Language Enrichment Programmes, which focus on the student’s mother tongue (not English or German).

Technology
In the European stream, there’s a 1:1 iPad programme for all students from Grade 1 to 5 and a bring your own device (BYOD) programme from Grade 6. The German stream differs slightly, as a 1:1 laptop programme is only introduced from Grade 6.

The school uses the popular app Seesaw in all grades to update parents on their child’s learning journey.

Academic results
GESS is performing well in both the German and IB programmes. While it may not be one of the top-ranking schools in Singapore for the IBDP, it is facing competition from some of the most elite, and often selective, schools here.

In the 2021 IB results, the average score was 35, the highest score was 44, and there was a 100% pass rate. Since 2015 the school’s average IB score has ranged from 31 – 35, and its consistency in academic performance is reassuring. IB graduates typically attend universities in the US, UK, Germany, Netherlands, and Canada.

Faculty and leadership
The current principal is Stefan Pauli, who joined GESS in August 2021. Mr Pauli says that he would like to dedicate his first 100 days to "getting to know the GESS culture, students, campus and have as many meetings as necessary with students, teachers, parents and the Board to go about this". Teachers in the German stream are recruited from Germany, and those in the European stream are recruited worldwide based on their experience of teaching the IB.

Campus and facilities
The $135 million campus is divided across a five-storey Education Block and a three-storey Sports and Recreational Block. It is home to a sports field and hall, swimming pool, Olympic-sized swimming pool, music and drama facilities, age and subject-specific classrooms, canteen, specialist rooms, a design technology studio, libraries, makerspace, a 400-seater auditorium, media/green-screen room, cooking lab, and a black box theatre.

Located close to the beautiful leafy green Bukit Timah Nature Reserve, the new campus has plenty of environmentally-friendly features such as vertical greenery and a rainwater-harvesting system.

What does the school feel like? Get the GESS Experience here.

Located next to the Bukit Timah Nature Reserve, GESS has one of the greenest locations in Singapore. As well as enjoying beautiful views, students have the opportunity to study outdoors, take part in environmentally-oriented activities, and see their lessons come to life in a natural setting.

The campus has been awarded the Green Mark Gold Plus stamp of approval from the Singapore BCA (Building and Construction Authority). Environmental features include a rainwater-harvesting system, green façade with vertical greenery, and there are plans to develop a butterfly garden in the school’s rooftop garden.

GESS is a mid-range school in terms of fees, particularly for the German stream, and parents should certainly consider the value of the new campus and its facilities when assessing the cost of an education here.