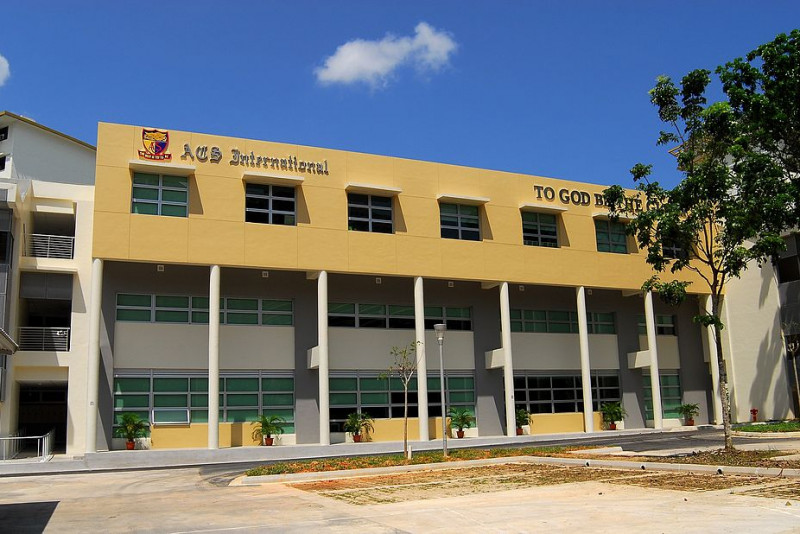 With a mantra to ‘build through belief’ this IGCSE/IB secondary school is defined by Christian values, a 130-year tradition of learning excellence within Singapore – and some of the smallest class sizes in the city.

In its own words,

"ACS (International) caters for Singaporeans and overseas students who are interested in an international curriculum in a Singaporean context."

A Methodist school
Are you a parent, teacher or student at Anglo-Chinese School (International)?
Take a survey arrow_forward

This Holland Village-based school celebrates the ACS brand of education, which aims to develop well-rounded students of strong moral character who excel academically, physically, socially, and spiritually. As a Methodist school, ACS (International) is guided by Christian values and beliefs – from academic pursuits in the classroom to sporting performance on the field, from student leadership programmes within the school to community projects overseas. That said, the school is not strictly a ‘religious’ school; while there is a weekly half-hour chapel service for students, the door is open to children from all nationalities and faiths.

“ACS (International) is truly no ordinary school. In partnership, we develop outstanding young men and women who are engaged, inclusive, self-assured and with fine character.”

Founded in 2005, ACS (International) is set apart from its sister schools by having an international curriculum that starts with IGCSEs and ends with the IB in the last two years. As you’d expect from any international school, there’s a broad and progressive six-year academic programme focusing on English, science, mathematics, arts, and humanities. One of the things that stands out about ACS (International), though, is its extensive leadership programme. Students are given plenty of opportunity to hone their leaderships skills by taking on one of 200 formal student leadership positions, attending leadership conferences and workshops, and through teacher-student mentoring. The programme also focuses on life skills such as public speaking, presentations, and time management.

In line with the Singaporean trend for ‘values in action’ programmes – and guided by the school’s Christian values – the ACS (International) curriculum encourages community service. Students take part in conservation and construction projects locally and internationally to help the vulnerable and needy. Learning goes way beyond the school walls – and as far afield as Cambodia, Indonesia, Japan, and Zimbabwe – to teach students about teamwork, problem-solving, and fundraising.

Grades are improving year on year, and all results should take into account that for 45% of students, English is a second language. The 2016 results for Year 12 IB students show a 99.4% pass rate and an average score of 35.2. While this is higher than the global average, it doesn’t quite measure up to Singapore’s average of around 38 points. In Year 10, there was an IGCSE pass rate of 91.6% and the top-performing subjects were music, physics, maths, and chemistry.

Singapore has a reputation for larger class sizes (with a higher calibre of teachers), but ACS (International) comes out top with some of the smallest class sizes in the city. With a teacher to student ratio of 1:8.7, the school promises to give every student the “opportunity to explore and develop their unique strengths”.  This goal is supported by the school’s pastoral house system, which assigns every student a house master who focuses on their personal and social development; two full-time Christian Ministry staff also offer counselling and support.

Since opening its doors in 2005 with just 150 students, ACS (International) has grown rapidly. Today, 1,000 12 to 18 year olds walk through the school gates every morning – a mix of Singaporean students and international expats from more than 30 different countries. The admission process includes an oral interview and written entrance exams in English and maths, and a bridging programme is offered to students with English as a second language.

Since being built on the site of the now defunct Buona Vista Secondary School, ACS (International) has been completely renovated. Today, its modern campus sits beautifully within the leafy green bohemian Holland Village. Facilities include science laboratories; music classrooms and music technology computer lab; a fully air-conditioned sports hall with basketball courts and climbing wall; weights and fitness room; tennis courts; a 550-seat canteen; two storey library space; art rooms; computer lab; and a floor dedicated to drama. There are boarding facilities at the ACS Independent and ACS Outram Hall hostels. The 500-seat Oldham Chapel is used by the school, and by the Holland Village Methodist Church as its place of worship on Sundays.

The academic year runs from January to December, and there are two semesters per year. In their first two years at ACS (International), students follow IGCSE-preparation courses in subjects ranging from English, maths, and science to physical education, life skills, history, geography, art, music, and languages. After sitting their international GCSEs, students move on to the International Baccalaureate Diploma Programme (IBDP), which is studied in lieu of A Level and similar programmes. The school day is divided into five one-hour periods, with a choice of CCAs after school.

Admission is based on the school's own entrance exam (and not the MOE’s AEIS). Fees range from $24,206 to $29,606, which is average in terms of international tuition fees and considerably cheaper than other high performing international schools.