How Covid Has Changed Sport in Schools

WhichSchoolAdvisor.com looks at how Singapore’s international schools are tackling the restrictions on PE and games in 2021 – and how the lack of competitive sport has moved the focus onto the individual player.
How Covid Has Changed Sport in Schools
By Carli Allan 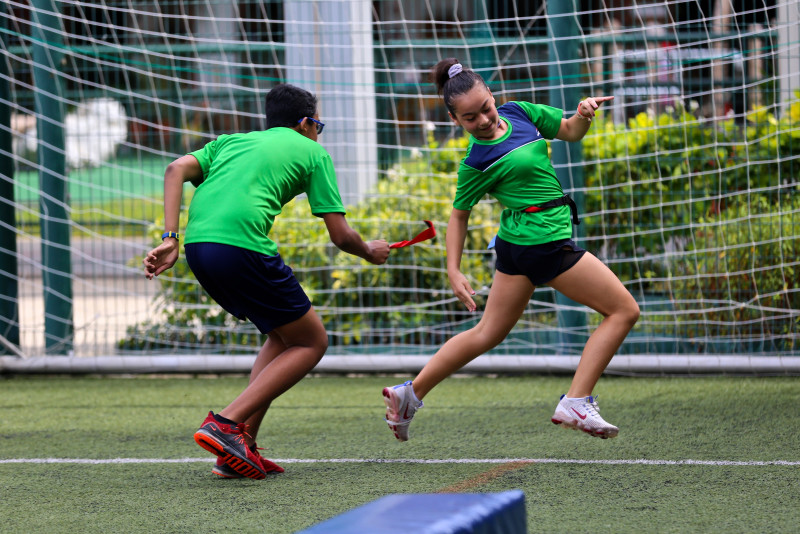 Covid-19 has been a game changer. Overnight, school playing fields and sports courts were deserted, gyms were left empty, and swimming pools were shut down. When Singapore’s schools closed due to Covid-19 last year, time out was called on PE lessons and sports clubs too.

A year later and, while campuses may have reopened, the challenges still exist with school sport now being played with new rules on social distancing, restrictions on equipment, and bubbles of just five students. Team sports and physical contact are still suspended; after-school sports clubs have stopped; and trophy cabinets are gathering dust with inter-school tournaments put on hold.

What is being done to keep all students physically active? What new Covid-compliant sports are being introduced to the curriculum? And how are schools dealing with the ongoing restrictions on competitive sport? WhichSchoolAdvisor.com investigates.

PE is one of the most practical and hands-on subjects in the school curriculum, making it a difficult subject to teach online during the switch to online learning. It left PE teachers quickly thinking of creative ways to keep their students physically active without the use of playgrounds, sports fields and gymnasiums. From fitness sessions to virtual sports days, Singapore’s international schools were able to offer some sort of PE online.

Back on campus, and schools have been challenged further to teach PE with new restrictions on indoor sport, contact sports, sharing equipment, and caps on the number of students. The move from online fitness-based sessions back to physical lessons has seen varying changes to the PE curriculum in both primary and secondary years.

At Tanglin Trust School, students aged three through to 18 years have been learning and playing many of the sports offered pre-Covid-19, including invasion games, athletic development, aquatics, fencing, netball, football, rugby and touch, trampolining, and climbing. But social distancing measures and the limit on student numbers have really changed how and what skills can be taught; football and netball teams have been replaced with bubbles of five players, while tackles, scrums and line-outs have been taken out  of the game.

Tanglin's Assistant Director of Sport Dave Radcliffe, explains how the school has turned this into a positive learning experience.

“Working in groups of five, students embraced the intensive 1 vs 1, 2 vs 2 activities and enjoyed the chance to play in modified spaces, with modified rules, often with 2 vs 2 and one ‘Golden Player’ who always played for the team in possession. This rapid and frequent transition between attack and defence encourages our students to be intelligent decision makers in support of their technical development.”

Tanglin's students have also been learning parkour and freestyle movement over the past year. Weekly lessons have focused on co-ordination, timing, balance, agility, spatial awareness and muscular strength used in parkour, combined with freestyle jumps, climbs, swings. This approach to ‘movement education’ is at the core of Tanglin’s approach to all sport and PE programmes in the school – and is perfectly aligned with Singapore’s limits on the number of students playing sport together.

“At Tanglin, we continue to offer parkour at all levels across the school, with the aim of developing students' general athletic skills in what we call 'opportunity-rich environments'. Training programmes for our sports teams now also incorporate parkour-style training, due to the sport's exploratory and adaptive movements, and the way it requires students to utilise opportunities for innovative and autonomous performance.”

Similarly, Brighton College (Singapore) says that the biggest change caused by Covid-19 has been students playing sport in smaller groups rather than in large teams. The school (which only opened in September 2020) is teaching the majority of sports in its curriculum but it has had to "change the format by reducing the numbers of players in small-sided games".

"Under such restrictions we have primarily focused a little more on fundamental movement skills, such as running, jumping, skipping and hopping. We have also focused a lot on individual ball skills such as throwing, catching, and kicking ensuring the students are proficient and confident in these key areas.

"The focus of sportsmanship and other significant characteristics such as collaboration skills and fair play still occur during these small-sided games, but rather than shaking hands or giving a fist pump, the students give foot pumps instead."

Likewise, at Nexus International School, contact sports such as rugby have continued to be played but the same bubbles of five students playing together every week. Nexus' Head of Sports Bevan Moriarty adds: “Any competitive games were in those groups as there was no mixing of the groups of five.

“There were no inter school or club competitions, so it was hard to keep them focused without the competitive element. We saw a drop off in the number of students turning up to those team sports… but some of the players have become more highly focused on fitness.”

At St Joseph’s Institution (International), PE lessons have moved towards more socially distanced sports such as badminton, table tennis, volleyball, ultimate frisbee, and fitness classes rather than ‘invasion games’ such as basketball, football and netball. As Ian Fern, Head of Sports and CCAs (High School) says, “Table tennis has never been so popular!

The school has run more sports classes before and after school to help manage the restrictions on numbers, moved equipment outdoors to hold early morning fitness classes, and encouraged students to sign up to the Strava app so that “they could do their workout safely after school and share the session with their PE teacher”.

How are schools making up for the lack of competitive sport?

Singapore’s National School Games (NSG) has just been cancelled for the second year running, and the Athletic Conference of Singapore International Schools (ACSIS), which hosts tournaments for students at more than 25 international schools in Singapore, has been unable to run any events for the past three seasons.

While students may not be able to compete at swim meets or play sports such as contact rugby, the many weeks of online learning have perhaps taught them to focus on what they can do.

Tanglin's Assistant Director of Sport Dave Radcliffe says: “Feedback from our students reflects that they enjoy being active and socialising through sport, giving them that sense of normality at a time when there are constraints on other areas of their lives.”

The Covid-19 generation of students are missing out on the opportunity to travel across South East Asia and face other schools on the football pitches and in the swimming pools. Ian Fern, Head of Sports and CCAs (High School) at SJI (International) speaks for many when he describes the huge disappointment amongst high school teams who “dreamt of representing their school at this level after seeing teams over the years receiving accolades and recognition.

“This was their time and it was sadly taken from them.”

To fill the void left by the absence of daily tournaments and fixtures, schools are hosting more inter-house matches than ever before to keep the excitement of competitive sport. As SJI (International) explains, these inter-house tournaments have created “a real buzz around the school”.

In a typical year at Tanglin, students in 140 competitive sports teams known as the Tanglin Lions will compete in 600 inter-school fixtures and 20 overseas competitions. While students have faced the bitter disappointment of not competing, Mr Radcliffe explains how inter-house tournaments at Tanglin have helped to keep the Lions spirit alive.

“While our students have naturally missed the opportunity to play competitive matches and tournaments, we have seen motivation levels and participation numbers consistently high throughout the year. The move to groups of eight in Phase 3 were a welcome introduction. This afforded us the opportunity to play 4 v 4 games in sessions, which is an ideal number to replicate the movement patterns, angles, decisions and strategies commonly found in full competitive games.

“Closely following Sport SG guidelines, we were able to put together an internal schedule of mini-leagues in sports such as football, netball and touch. The introduction of staff teams into the Touch league, from a wide variety of faculties and support teams, added to the enjoyment and motivation of our students.”

Tanglin has launched a new year-round Lions rugby pathway, and the school’s Head of Rugby Andy Martin says the cap on group sizes has been a “real silver lining of the past year” as it has given coaches the space to focus on the individual player.

“The restrictions requiring small group sizes have meant players are spending more time in possession and having more opportunity to practice decision-making. Moving away from planning training programmes that focus on competition is a significant part of the new, wider strategic direction in sport at Tanglin that places player needs and development firmly at its centre.”

In another sport, gymnastics, Tanglin has hosted in-house competitions for its recreational gymnasts in Years 3-7 where, once again, the focus is very much on personal performance.

Tanglin’s Gymnastics Director Lauren Sweeney adds: “For our Competitive Gymnasts, it has been an unusual competitive season given the ongoing restrictions, however we were thrilled to be able to host an in-house competition in February and attend the first ever inter-school competition with UWC Dover in April.

“These were very exciting events for our competitive gymnasts and helped them to get back into the competitive environment. The focus of these competitions was personal performance and providing our athletes with the opportunity to move outside of their comfort zones to perform once again.”

Without the pressure of team selection and matches, students not only have the time to focus on skills and fitness but also the opportunity to relax and simply enjoy the sport. Mr Fern at SJI (International) explains:

“Our students tend to be less competitive and prefer to be playing friendly matches with their friends. It has been quite refreshing to see students play with freedom and without the nerves of perhaps not making the team they prefer. This suited the majority of our students who just wish to turn up and play for their own wellbeing.”

In the absence of sports leagues and results, though, how can schools assess how far their players have improved in the past year? In rugby, Tanglin’s Andy Martin is closely observing how students are moving and affecting the games tactically through their decision-making.

“The team-wide improvements that coaches are witnessing is tangible and it will be exciting to see how this transfers back into competition when it returns,” he adds.