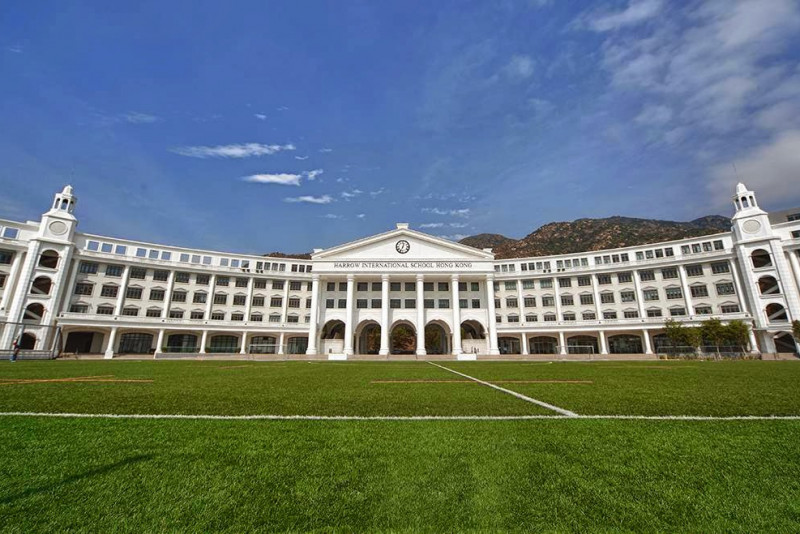 As well as upholding many of the Harrow traditions, this all-through British school has a boarding ethos, focus on extra-curricular activities, and mission to educate leaders of the future as part of its DNA.

For a school that has only been open since 2012, Harrow International Hong Kong feels incredibly well-established. But, when you consider that this all-through school is ‘built’ on the foundations of the original 400-year-old British boarding school, that’s hardly surprising.

Despite its Gold Coast setting in the New Territories, Harrow Hong Kong is an archetypical British public school. It’s also one of Hong Kong’s few international boarding schools. The Harrow-ness that defines one of the world’s oldest and most famous all-boys boarding schools is felt throughout the corridors and classrooms of this Hong Kong franchise, from the Harrow straw boater and blazers to the House system. Its Britishness also shines through in the architecture of the eight-storey school building, which has been designed to resemble the sweeping Royal Crescent in Bath.

“Many aspects of the school are characteristic of Harrow: high expectations of students and teachers; excellence in academic work; excellence and a high degree of participation in extra-curricular pursuits; high quality pastoral care; a genuine focus on the individual; and the development of leadership skills.”

Harrow Hong Kong is focused on more than tradition though. This school for 3 to 18-year-olds has strong academic results and a reputation for excellent extra-curricular activities. It also differs from Harrow UK in several ways: it is co-educational, it is open to children as young as 3, and it offers a choice of day and boarding places.

Are you a parent, teacher or student at Harrow International School?
Take a survey arrow_forward
The Harrow way
Harrow International Hong Kong is a school of two halves. The Lower School includes K1 and K2 (three to five years old) and the Pre-Prep School (Years 1 to 5). The Upper School includes the Preparatory School (Years 6 to 8); the Senior School (Years 9 to 11); and the Sixth Form (Years 12 to 13). Boarding begins from Year 6 and just less than half of the Upper School are weekly boarders; there are a few full-time boarders, but it seems that most families prefer the balance of a boarding experience during the week and family time at the weekends.

Harrow Hong Kong follows the National Curriculum for England, with students working towards their IGCSEs in Year 11 and A Levels in Year 13. In four years, the school has grown from its starting total of 750 to more than 1,175 students, the majority being expats.

A boarding ethos is part of the school’s DNA. Compared to a typical day school, Harrow Hong Kong has a longer school day that runs from 8am until 2pm (K1 and K2), 3.50pm (Years 1 to 5), and 4.50pm (Years 6 to 13). While some may feel that the day is too long, others may prefer its less frantic schedule and the additional time for after-school activities such as sport, music, and drama. Students are expected to do daily homework – or prep as it’s called here – from Year 1. And boarders have the added advantage of having tutors on hand when doing their evening prep in the study rooms within each House.

It is one of four international schools within the Harrow family, all of which follow the house system. Both boarders and day students are members of one of six Houses, which are each presided over by a House Master or Mistress who is responsible for their pastoral care. All students attend their House for a daily call-over and lunch, and you get the feeling that boys and girls develop a strong sense of belonging and allegiance to their House over time. It also helps to create a ‘small school’ atmosphere within this large school.

Harrow Hong Kong claims to be a selective school that “admits those pupils with the aptitude, ability and personality who are most likely to thrive in and contribute to its diverse international community”. Students don’t necessarily have to be academically brilliant, and they may still be accepted if they shine in areas such as art, sport, or music.

The results
The Harrow name does have a reputation for academic excellence though, and Harrow Hong Kong is no different. In the 2018 A Level results, 30% were A* grades, 61% were A* or A, and 83% were A* to B.

Academic and extra-curricular
Students receive a well-structured education at Harrow Hong Kong. The Early Years follow the UK-based Early Years Foundation Stage (EYFS) curriculum, which includes specialist teaching in music and PE. Years 1 to 5 follow the UK primary curriculum, including music, PE, swimming, Chinese, and a further language option of Chinese, French, or Spanish. The teacher to student ratio here ranges from 1:22 up to 1:24.

While it may be steeped in tradition in so many ways, Harrow Hong Kong has not lost touch with the modern world. This school is just as dedicated to delivering A-grades as it is to producing future leaders, sports players, musicians, and all-rounders. It offers an impressive choice of extra-curricular activities (ECAs) for all students from Year 1 onwards as part of the daily timetable, and in enrichment time after 5.15pm for boarders; these include team and individual sports, music, art, drama, cultural, and academia. Budding artists can study anything from silk scarf painting to anime, musicians can perform with a wind ensemble, pop orchestra, or A cappella group, and drama students rehearse for annual productions. The school fields teams in everything from athletics to water polo, and its sports programme is large enough to warrant its own website.

With a legacy of Old Harrovians including Winston Churchill and King Hussein of Jordan, Harrow takes its mission statement – Leadership for a better world – very seriously. But how does this benefit your child? As well as offering leadership opportunities within the school, Harrow Hong Kong has a Leadership in Action programme, runs charity and community service trips locally and internationally, and it organises Adventure Camps that “take students out of their comfort zone”.

The campus
Located on a nine-acre site in Tuen Mun, Harrow Hong Kong has one of the most spacious campuses in Hong Kong. Its distinctive, white, crescent-shaped building has been designed to resemble the Royal Crescent, Bath – and it certainly makes a statement about the prestige of the school.

As you’d expect from such a new school, the facilities are purpose-built and world-class. The Lower School includes dedicated areas for Early Years and Years 1 to 5, with various indoor and outdoor learning environments. There is also a dedicated ICT suite, music room, and art area. The Upper School has science labs, specialist art, music, and drama facilities, and a recording studio; classrooms are equipped with traditional desks and Harkness tables, the latter being used for lessons that encourage minimal teacher involvement.

Facilities including an auditorium, sports/assembly hall, fitness room, artificial and grass sports pitches, tennis/basketball/netball courts, an adventure playground, indoor swimming pool, and library and learning lounge are used by all students. There is also a canteen serving hot lunches.

Fees
With a name like Harrow, the fees were never going to be cheap. As you'd expect, Harrow Hong Kong has some of the city's highest fees, which range from HKD 166,671 for primary through to HKD 197,930 for A Level students. Add on the annual levy of HKD 60,000 and the cost of an education here will always reach the HKD 200,000 mark. It may be useful to know, then, that there are scholarships for academic excellence and outstanding talent in music, art, drama, sport, or other talents.