After a second year of disruption due to Covid-19, students have received this year’s A Level results – some based solely on Teacher Assessed Grades, others based on written exam results.
2021 A Level Results, Hong Kong
By Carli Allan 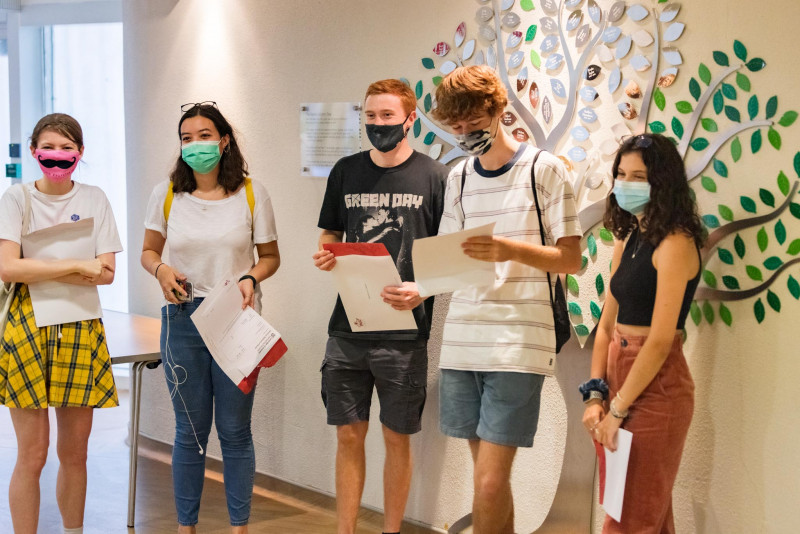 Students at international schools in Hong Kong have received their A Level results in an unusual year with results based on a mix of Teacher Assessed Grades and written exam results.

In line with students worldwide, GCE/International A Levels awarded by Pearson EdExcel and AQA were cancelled due to the pandemic; Cambridge was the only A Level/IGCSE exam board to run its June 2021 exam series as planned, where it was permitted by national education authorities.

In Hong Kong, this meant that students sat written exams for some subjects and received Teacher Assessed Grades (TAGs) for other subjects, based on mock exams, coursework, essays and in-class tests.

"Kellett, like many schools in Hong Kong, is a highly academic school. Each year we have some of the best, if not the best, A Level results of any British international school in the world – and this year was no exception.

"We are delighted that the students have been rewarded for all their hard work over two very disrupted years in Hong Kong. We were fortunate that this was a very bright year group and that they were suitably skilled and motivated to make the most of the extended periods of home-learning that were forced upon them.

"Most pleasingly, almost all of them are going onto the university of their choice – be that in the UK, the US or other great institutions around the world. 61/62 of students who applied to the UK secured places at their first-choice institution.

"Kellett was one of the few schools in the world (alongside a handful of schools in Singapore and Malaysia) which actually sat CAIE (Cambridge International) examinations this year, so our overall results are a combination of Teacher Assessed Grades (TAGs) and formal examinations. Well done to all the students and staff concerned.”"

At Harrow International School (Hong Kong), out of a cohort of 76, 20 pupils received all A* in all of their subjects, with a majority of 55 pupils achieving all A*s or As. Over 84% of all results were A*-A.

"These exceptional results have been achieved whilst living through considerable disruption and uncertainty caused by the global pandemic. This year was like no other, and we are immensely proud of the way our pupils have adapted to the constant changes. As always, our pupils have risen to the challenge, and our staff and teachers have constantly kept the best interests of our pupils at heart."

Other schools offering A Levels include Diocesan Girls' School, St Paul's Convent School (Secondary Section), YMCA of Hong Kong Christian College. These are Direct Subsidy Scheme (DSS) schools, which are private schools that receive a subsidy from the Hong Kong government. Although DSS schools must focus on offering a curriculum that targets local students and prepares them for local examinations, some also offer A Levels.

Exam board Cambridge International awarded A Level and AS Level grades to just under 170,000 students worldwide this year. Overall, there has been a slight rise in the overall grade achieved compared with 2019 (when normal exams last took place) and 2020 (when all exams were cancelled), which is between half and two-thirds of a grade.

Cambridge will release its IGCSE results on Thursday, August 12.

Figures published by the Joint Council for Qualifications (JCQ) for England, Wales and Northern Ireland showed that A Level results have reached an all-time high, with nearly 45% of this year's entries being awarded an A* or A. This follows a second year of disruption due to Covid-19, where students have received A Level results awarded by teacher assessment rather than national exams.

In England, Wales and Northern Ireland:

UK universities, who received the results last week from the Examination Boards, anticipated that this year's grades will, on average, be one grade higher than last year by comparison.